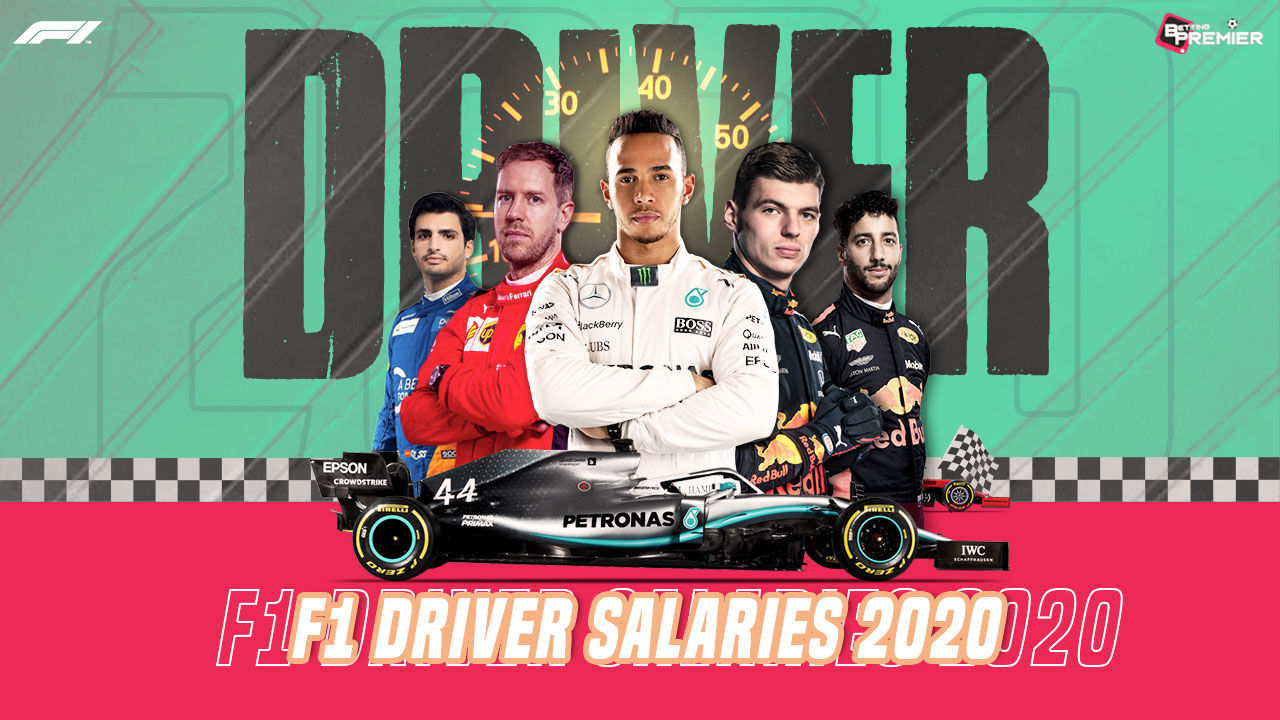 With the 2020 F1 season in full swing, the top four highest paid drivers remain the same as of last year. As expected the UK Champion Lewis Hamilton of F1 racing tops the list followed by Ferrari’s Sebastian Vettel, Daniel Ricciardo and Max Verstappen.

But just below them, the table has taken a wild course of twists and turns as the other standings have changed significantly. In the strange year of 2020, many F1 drivers have suffered the fate of losing their grip on the asphalt like George Russel, Lando Norris, Daniil Kvyat and several others have been kicked out.

Of all Hamilton’s accomplishments, the Brit’s appearance at the top of the F1 driver salary list doesn’t add much of a surprise to any F1 fan. The Mercedes Champion signed a new two-year deal in 2018, which is also set to expire at the end of this year and he has nothing to worry at the moment.

The German began his career as a test driver and the Ferrari driver soon became the youngest pole-sitter and race winner in F1 history. Whilst driving for Red Bull, Vettel grabbed four World Championship titles in a row and he has competed in some of the most legendary showdowns of the last 20 years.

Since his signing with Ferrari in 2015, Vettel’s career has seen lots of ups and downs and he exactly hasn’t been any more consistent or extraordinary. But he still manages to grab the second-highest F1 driver salary, which makes him the nearest competitor to Lewis Hamilton on the track and salary alike.

The Belgian-Dutch driver for Red Bull was just 17 when he took charge in the 2015 Australian Grand Prix, Max Verstappen is the youngest driver to ever compete in F1 history. Though he hasn’t won any World Championship titles, the youngster still has plenty of time to make it happen as he just turned 22 last September.

Everybody was baffled when the Australian signed a 2 year contract with Renault in 2018 after which his salary rocketed up and it is much higher than what he was earning with Red Bull. On the other side, since his performance has not been so convincing, Renault is still making him show up on the tracks.

With the end of the 2019 season, Ricciardo successfully secured the 9th spot in the championship with a tally of 54 points. Although for the 2020 season, he is to be partnered with Esteban Ocon of Mercedes and fans hope that the results are in favor for the talented driver, who has made the nation proud.

The 22 year old Ferrari driver – Charles Leclerc made his F1 debut in 2018 for Sauber after he made a career changing shift to Ferrari in 2019. He has already won the Pole Trophy in the 2019 F1 season becoming the youngest driver ever in F1 history and the first non-Mercedes driver to win it. Leclerc finished 4th at the 2019 F1 season making Ferrari proud, he is already earning big bucks and is definitely the one to watch out for.

Despite earning a respectable salary alongside his Mercedes partner Hamilton, the Finnish driver is yet to make his big cut as he lies in the might shadows of the Brit. Also Bottas earns far more than the majority of F1 drivers and his run in the 2019 season has been worth of appreciation, he has been racing for Mercedes since 2017. Valtteri Bottas finished the last season at 2nd place behind Hamilton, recording his most successful season to date. On the whole, the Finn recorded 4 wins, 15 podium finishes, 5 pole positions and a stunning 3 fastest laps.

Carlos Sainz Jr is a Spanish driver who began racing Formula 1 in 2017 with Toro Rosso at age 23, he is the son of the legendary rally driver who bears the same name. Since then, Sainz has been driving for Renault and Red Bull Racing until he moved to McLaren in 2019. The Spaniard is yet to make some great achievements at McLaren but he is quite confident about them. At the 2019 Brazilian Grand Prix, he took his first F1 podium finish with 3rd and he also finished the 2019 season ranking 9th overall.

The Mexican Wunderkind – Sergio Perez took his first F1 podium at the 2012 Malaysian Grand Prix with Sauber, later moving on to McLaren, then to Force India until 2018. Since his career has been bound to be affected by certain external factors right from the start, Perez now races for Racing Point F1. He signed a 3-year contract extension in 2019 and the Mexican proved his worth by being placed 10th in the 2019 F1 season.

The French-Swiss racing driver has a special credit to his name; he was the first F1 driver since 1994 to get banned from F1 after he caused a multi-car pile-up at the 2012 Belgian Grand Prix. Although he returned to F1 the following year and drove exceptionally well for Lotus until 2016, which is when he switched over to Haas. The Swiss will remain with Haas for the moment, until his contract expires at the end of 2020.

The Iceman aka Kimi Raikkonen is a Finnish-born driver and seasoned veteran aged at 40. He is a racer to be reckoned with and the Finn took out his one and only Championship back in 2007. After 9 seasons, he gave up on F1 to compete in the World Rally Championship in 2010 and 2011, but then returned to F1 in 2012. Also, Raikkonen made second finish overall in 2003 and 2005, and third in 2008, 2012 and 2018. The Alfa Romeo driver has won 21 Grands Prix titles to his name, making him the most successful Finnish driver in terms of F1 race wins and finished the 2019 season in 12th place.

The 23-year-old Renault driver is currently Daniel Ricciardo’s teammate for the 2020 season and his contract comes to an end this year. The French made his F1 debut for Manor Racing in the 2016 Belgian Grand Prix, replacing Rio Haryanto and later hit the papers. Esteban Ocon was Mercedes’ reserve driver for 2019 and therefore he did not place, but was a tough contender to take the second Mercedes seat alongside Hamilton in 2020. But the Mercedes team decided to continue their journey with Valtteri Bottas but Ocon has a new opportunity to prove himself at Renault this season.

Kevin Magnussen is not new to the motorsport legacy as he has taken charge after his legendary father – Jan Magnussen, a 4-time Le Mans GT class winner and former F1 driver. Unsurprisingly, Kevin is a rare and veritable talent in his own right, he rose through the ranks as part of McLaren’s Young Driver Programme. Although after brief stints with McLaren and Renault, the Danish driver made his move over to Haas in 2017.

It is for Canada and its foremost F1 racer – Lance Stroll, who joined Racing Point in 2018 and opened his account in F1 to register his first points for the team at the Australian GP. The Canadian is no one but the son of billionaire Lawrence Stroll and as expected, he happens to be part owner of Racing Point. But Stroll’s F1 driver salary is a result of pure skill and he is one talented driver out there.

The 23-year-old Thai-British racing driver currently has signed up for Red Bull Racing. Alexander Albon raced for Toro Rosso for the first half of 2019, after he got promoted to Red Bull for the second half of the season. He also replaced Pierre Gasly initially who returned to Toro Rosso and that shift has provided Albon with a huge boost to his earnings. The Brit has also been ranked 14th on this list last year and Albon placed an 8th position overall in 2019.

Pierre Gasly was initially a GP2 Series champion after which he made his F1 debut in 2017, racing for Toro Rosso. Later, the French moved up to Red Bull by 2019 but unfortunately only to be unceremoniously demoted in the mid-season.  It slid down his Toro Rosso ranks, where he achieved 5 points finishes during the remainder of the season. At the now-famous 2019 Brazilian Grand Prix, Grasly capitalised on all sorts of chaos to finish in 2nd place. It was the first podium finish of his F1 career and Toro Rosso’s best race result since the 2008 Italian GP but in 2020, Gasly is currently racing for Alpha Tauri.