Bundesliga returns. Quadrupling that happiness is the return of fans to the stadium. Bundesliga 2021-22 season will start with 50% capacity in the stadiums on 13 August 2021. Once again, Bayern Munich won the Meisterschale last season. 50+1 rule helped to maintain the integrity of German football amid the ESL drama last year.

A chain reaction unfolded in the managerial sphere. Celebrated coach of Bayern Munich, Hansi Flick, pursued national duty to leave the Bavarians. Bayern hired the young pretender Julian Nagelsmann from Leipzig, Marco Rose of Monchengladbach shifted to Dortmund, Adi Hutter of Eintracht Frankfurt went to Monchengladbach and the American coach Jesse Marsch was imported from RB Salzburg for Leipzig. Delivering a brilliant season at Wolfsburg, Oliver Glasner moved to Eintracht Frankfurt and Mark van Bommel replaced Glasner in Wolfsburg. Time has come to check the effectiveness of this merry-go-round. 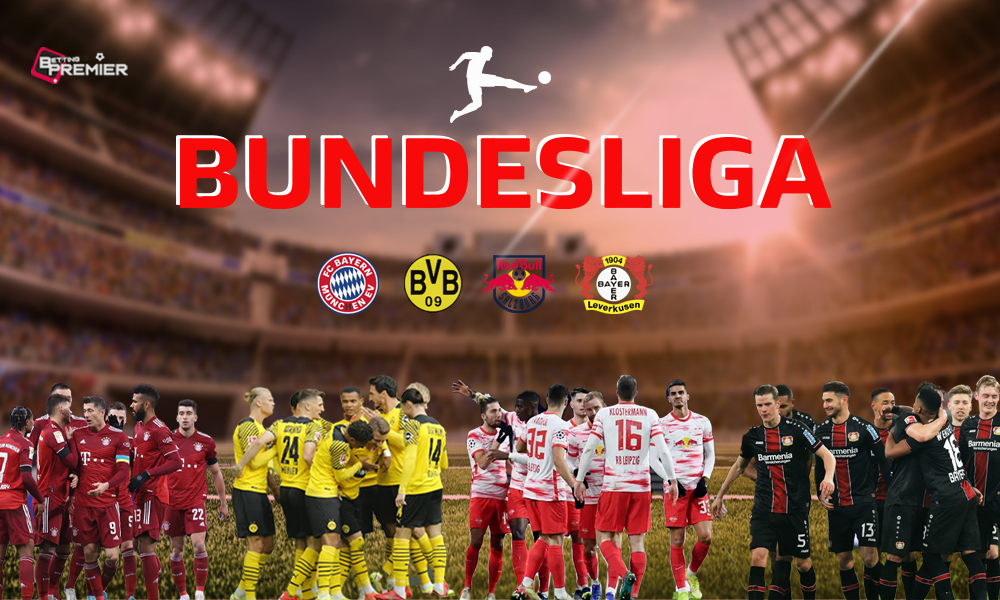 How to Watch Bundesliga?

Anyone wanting to watch the Bundesliga 2021-22 season in Great Britain or Ireland are well-served by Sky Sports, who have exclusive rights to stream Bundesliga matches in the UK.

ESPN has the rights to the Bundesliga 2021-22 in the US, and the lion’s share of games will be aired on its ESPN+ streaming platform, though some will also be on the traditional TV channels ESPN, ESPN2 and Spanish-language ESPN Deportes.

For Canadian viewers, the online platform Sportsnet will live stream the Bundesliga action for the 2021-22 season.

For fans in Australia, the broadcaster for the 2021-22 Bundesliga season is the sports channel beIN Sports.

The outright odds for all the teams to win the Bundesliga title this season is derived from the bet365.com site and mentioned below:

The following matches are scheduled to take place this week, with odds derived from the bet365.com site:

Here’s BettingPremier’s take on the major games on Bundesliga Matchday 22:

Bayern Munich meet VfL Bochum at Vonovia Ruhrstadion on Matchday 22 of the Bundesliga campaign this Saturday evening. Bayern pulled nine points clear of Borussia Dortmund at the helm of the Bundesliga table following the 3-2 win over RB Leipzig the gone weekend. Robert Lewandowksi found his 24th league goal of the season in the game. Not surprisingly, Bayern’s title credentials remain unchallenged as the league entered its second half. Serge Gnabry has 10 goals to his name thus far whereas Thomas Muller leads the supporting role with a league-high 16 assists. Nikhlas Sule is leaving the club for Dortmund in a surprising move, the defender has signed a pre-contract with the Black and Yellows and will be seen in those colours come summer. Manuel Neuer sustained a knee injury in the RB Leipzig the Bavarians’ captain will be out for a couple of weeks.

Bochum endured back-to-back draws against Koln and Hertha following the 1-0 defeat at the hands of Mainz. The newly-promoted side has only one win in the last seven outings, meaning unless they improve soon they will be seen battling relegation. The reverse fixture was humiliating for the hosts as the Bavarians inflicted a 7-0 defeat on them, their heaviest defeat in the league to date. A similar outcome is unlikely but it should be a comfortable victory for Bayern.

Dortmund visit Union Berlin at Alte Forsterei for a clash of Matchday 22 in the Bundesliga season on Sunday. Occasional losses have been holding Dortmund this season, Matchday 21 was another instance. In a match that saw goals galore, the Black and Yellows fell 5-2 to Bayen Leverkusen when they met for the first time in six years with both sides in the top three. The title slips away farther from Dortmund as Bayern picked up a win to stretch the gap to nine points. Nikhlas Sule will join the Black and Yellows this summer after five years with Bayern Munich. Erling Haaland’s absence showed in the loss to Leverkusen whose electric attacks exposed the flaws in Dortmund defence. Union Berlin are coming off a loss but three wins and a draw in the last five matches mean they remain in the top four. They seem determined to do finish in European qualification places this season after finishing seventh last term. A 2-0 loss to relegation-place Augsburg is not very promising, however. Even a draw in this game will boost Berlin’s morale but it sounds rather far-fetched.

Bayer Leverkusen play host to VfB Stuttgart at BayArena this Saturday on Matchday 22 of the Bundesliga campaign. Leverkusen must have found some new energy to keep going for the rest of the campaign as they blitzed second-place Dortmund 5-2 last time out in the league. Having cut the deficit with Dortmund to five points, Leverkusen have bolstered their hopes of finishing in Champions League places this time around. Leipzig have disappointed this season as have Wolfsburg, so Leverkusen will not likely be facing the kind of competition they otherwise would. There are no issues on the scoring front as Leverkusen have netted a whopping 17 goals across their last four home matches. Stuttgart, on the other hand, are awaiting relegation. Having won just four games this season so far, they languish at the bottom of the table only above Furth. Chelsea have shown interest in The Swabians’ left-back Borna Sosa. Leverkusen’s free-flowing attack is something Stuttgart are not equipped to handle; the former will add to the latter’s misery in this match.