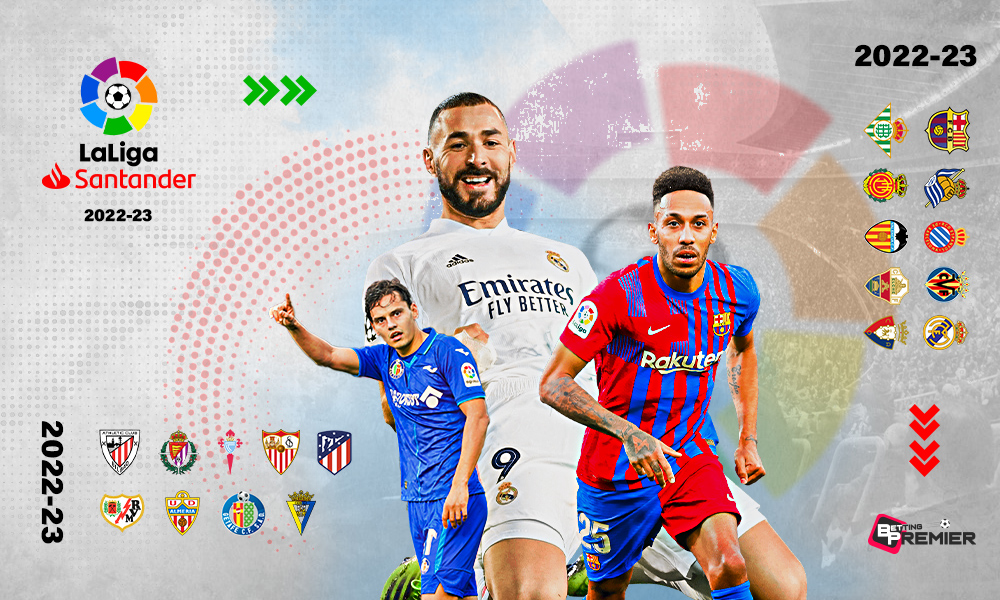 Spain’s top flight of football steps into the 2021-22 season on 13th August 2021. Atletico Madrid are the defending champions, they outsmarted their city rivals and Barcelona to achieve that feat. An ESL coup, led by Florentino Perez, failed in the previous season, the aftereffects of it lingers around.

Laliga’s tentacles reached deep into the ears of Barcelona and made them sneeze their heart out. Orphaned by Messi’s departure, Barcelona and even the league will undergo a few dull years. Entering the scene newly are Mallorca, Espanyol and Rayo Vallecano. Sergio Ramos and Raphael Varane have left Real Madrid. Diego Simeone has signed a new contract with Atletico Madrid, Sevilla’s Jules Kounde is grabbing attention in the market and Barcelona couldn’t find the deals they are eagerly waiting for.

Here’s BettingPremier’s take on the major fixtures of LaLiga Matchday 32:

Real Madrid and Sevilla lock horns with each other at the latter’s home Ramon Sanchez Pizjuan Stadium in the LaLiga campaign on Sunday. Sitting 12 points clear of second-placed Barcelona at the summit of the table, Real Madrid are set to reclaim the Spanish crown. Following the 2-0 home win over Getafe in the league, Los Blancos were edged 3-2 by Chelsea at Bernabeu in the Champions League quarterfinal but Ancelotti’s men advanced into the last four on an aggregate score of 5-4. Karim Benzema is having the best season of his career and is leading the race for the Pichichi trophy with 24 goals. Isco, Eden Hazard and Jesus Vallejo remain on the treatment table. Despite having won just one of the last five league outings, Sevilla sit third in the standings three points clear of Atletico Madrid. Following the 1-0 loss to Barcelona on the road, Los Nervionenses beat Granada 4-2. Sevilla’s European endeavours ended at the hands of West Ham in the Europa League Round of 16. Players out with injuries are Karim Rekik, Marcos Acuna, Thomas Delaney and Fernando. Real Madrid will pip the hosts to pull further clear at the helm.

Barcelona will play host to Cadiz at Cam Nou for Matchday 32 of the LaLiga campaign on Monday. Xavi’s men are on a 15-game unbeaten run across all competitions which is currently the best in the whole of Europe. Last time out, the Catalans beat Levante 3-2 on the road in the LaLiga campaign to remain second behind Real Madrid at the top of the standings. The second leg of the Europa League quarter-final tie against the German outfit Eintracht Frankfurt is around the corner, the Blaugrana have enough confidence to take into the home fixture despite having drawn the first leg. The Catalan club has been linked with Robert Lewandowski who is set to leave Bayern Munich this summer. Gerard Pique, Samuel Umtiti, Sergino Dest and Ansu Fati are sidelined by injuries. With just five wins this season thus far, Cadiz are battling relegation. A win or two could lift the Pirates to safety and they will be giving their all from now on to produce positive outcomes. However, it’s a tough stretch ahead for the Andalusian outfit. Barca will have a commanding victory in this match.

The outright odds for all the teams to win the La Liga title this season is derived from the bet365.com site and mentioned below:

This week’s schedule of La Liga matches and their odds derived from bet365.com are mentioned below:

How to Watch La Liga Santander?

La Liga TV and Premier Sports have the broadcasting rights for the Spanish league in the UK.

International pay-TV sports specialist beIN Sports has the rights to broadcast La Liga Spanish football until 2024 in the US and it is exclusive too.

This year, TSN and RDS will telecast the games for Canadian fans.

If you plan to watch the top flight of Spanish football from Australia, you’ll need to subscribe to beIN Sports.

Voot and MTV are the official broadcasting partners in India.

Globally, fans from most countries can live stream the matches from Laliga’s official page on Facebook.

In addition, bet365.com will live stream the events for active bettors on Matchday.