The 2019-20 NHL season is the 103rd season of operation of the National Hockey League. With 31 teams competing in an 82-game regular season. The regular season began on October 2, 2019 and will end on April 4, 2020. The 2020 Stanley Cup playoffs will begin a few days afterwards with the Stanley Cup Finals held in late May and early June. The entire schedule was released on June 25, 2019.

The 2019 NHL Draft has concluded and we have seen team address some of their needs. Only a couple of those players are actually NHL ready at this point. Offseason moves have already begun and we are starting to see which players are up for grabs as we learn which teams are looking to win now and which are looking to build for the future. The St. Louis Blues have won their first title in franchise history, but unlike other champions in the NHL, the Blues are not a favorite to repeat this season. But that won’t be an issue for them as every team has the potential to be a contender at this point of the season.

The outright odds for all the NHL teams to win the Stanley Cup 2020 is listed below with the top teams that have better chances of lifting the Cup this season. 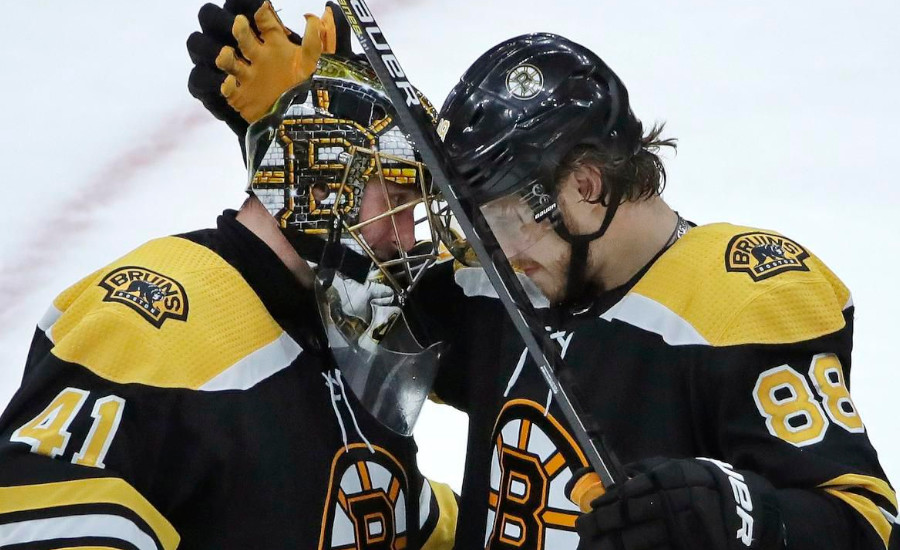 Many thought the Boston Bruins would be the ones to win the Stanley Cup 2019 when the Finals began. Everybody knew that they were the best team in the NHL during the playoffs and the way Tuukka Rask was playing, it seemed inevitable. Still they are one of the best teams in hockey and would continue to be so this season as well. With 19 players already signed and about $13 million in cap space, they could be an even better team this season. This could simply be due to the fact that while other teams around them made significant roster changes heading into next season, the Boston Bruins opted to stick with what they had. As mentioned earlier, the Bruins spent most of their offseason focusing on resigning what they already had. They were able to come to terms on extensions for key players such as Captain Zdeno Chara, Charlie McAvoy, and Brandon Carlo. Even head coach Bruce Cassidy was signed to a contract extension during the offseason.

The Bruins are also one of the few teams that are coming into next season with a completely established goaltending tandem, essentially playing with 2 starting-quality goaltenders. Tuukka Rask had a great regular season, finishing with a GAA of 2.48 and a save percentage of .912. In the playoffs, he really shined, putting together a GAA of 2.02 and a save percentage of .934. He was surely a lock to win the Conn Smythe award should the Bruins have won the Cup. Backing Rask up is another elite caliber goaltender: Jaroslav Halak. Last season, Halak put up great numbers of his own, finishing with a save percentage of .922 and a goals against average of 2.34 with five shutouts. 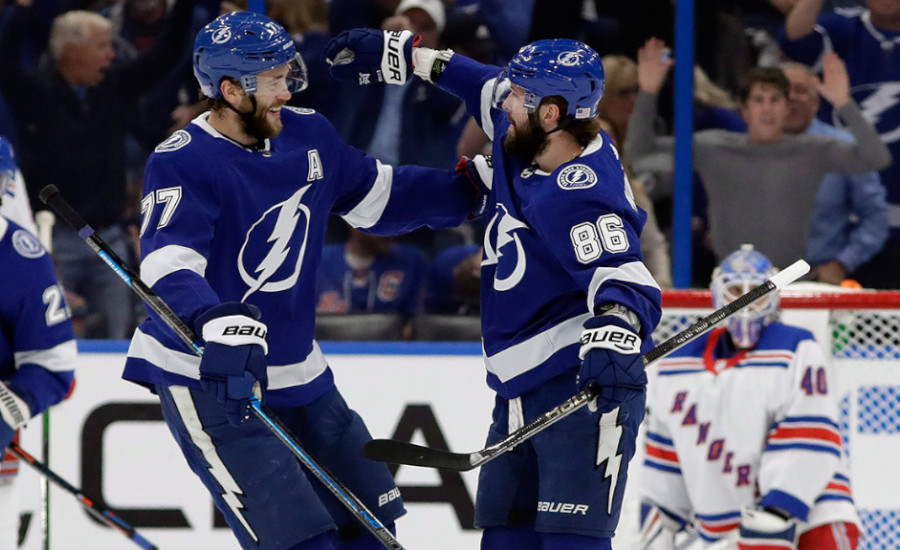 After a record-breaking regular season, the Tampa Bay Lightning are the favorites heading into the 2019-2020 NHL season. Despite their 128-point regular season, the Lightning had a terribly disappointing season. They were bounced from the playoffs in 4 games by the Columbus Blue Jackets and they led the league in scoring and was a top 10 defensive team as well. With the majority of their team returning, they will have a chip on their shoulder and be dangerous once again.

The Lightning finished with 128 regular-season points, 21 more than the 2nd placed team in the Eastern Conference. However after their quick exit from the playoffs, they upgraded their roster which included signing forward Pat Maroon, who helped St. Louis Blues win the 1st Stanley Cup in franchise history. Another key addition was veteran defenseman and 3-time all-star Kevin Shattenkirk. It will come as no surprise that the Tampa Bay Lightning went into the offseason as the 2020 favorites and that they came out of the offseason in the exact same position. Not only were the Lightning able to resign several core players to contract extensions but the team also managed to improve via offseason trades and signings. Tampa Bay had enough space to resign forwards Cedric Paquette and most recently, Brayden Point. They also signed defenseman Brayden Coburn and Vezina-winning goaltender Andrei Vasilevskiy to contract extensions. Some may be concerned about the loss of both Dan Girardi and defenseman Anton Stralman, but the addition of Schenn and Shattenkirk make up for those losses. They also have Victor Hedman and Ryan McDonagh playing the blue line this season as well. 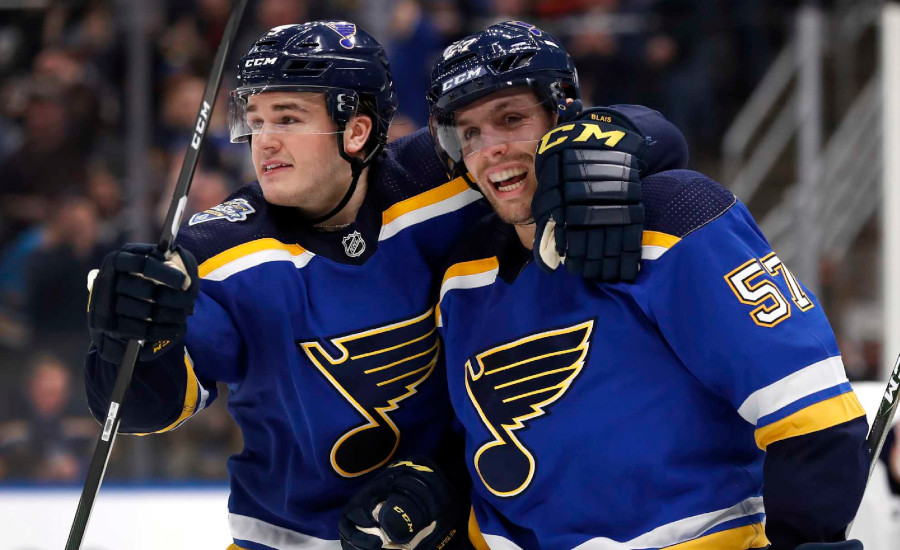 Despite winning Lord Stanley’s Cup last season, and retaining much of the same Cup-winning roster this offseason, the St. Louis Blues are only ranked as the 3rd overall favorite to win the Stanley Cup in 2020. Since winning back-to-back Cups is an extreme challenge, the Blues are quite the dark horse bets this year. Like the Boston Bruins, St. Louis Blues opted to remain much the same as last season. A few additions and subtractions were made during the offseason but the core of the team that won the Stanley Cup is intact and headed into the season.

St. Louis managed to resign key players this offseason such as Ivan Barbashev, Oskar Sundqvist and rookie goaltending sensation Jordan Binnington. The lone loss this offseason came in the form of Pat Maroon, who opted to sign with the Tampa Bay Lightning. But the Blues struck a massive deal during the 2nd week of pre-season play when they announced that they had made a trade with the Carolina Hurricanes, acquiring big-name defenseman Justin Faulk. A Stanley Cup repeat is most definitely not out of the cards for the St. Louis Blues in 2020. 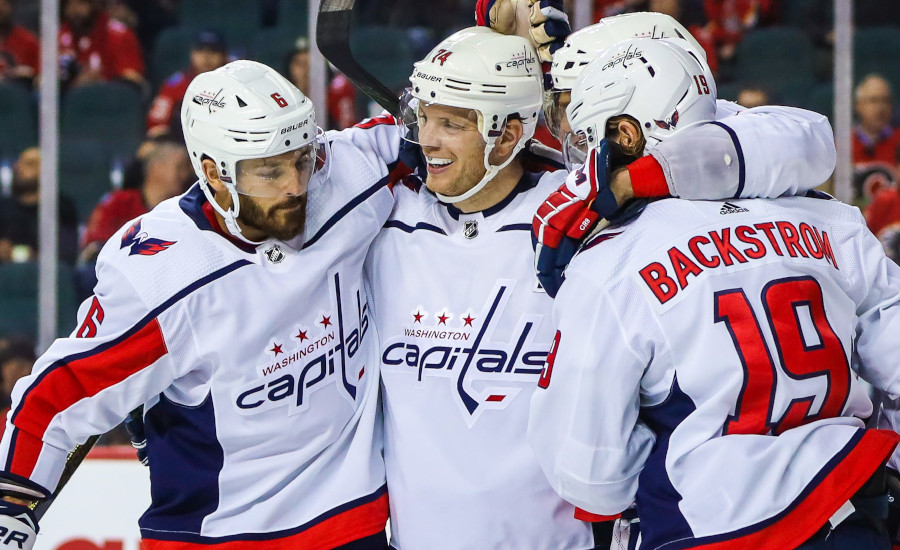 The Washington Capitals believe they have another legitimate shot at a Stanley Cup with their veteran core. The Capitals heading into the 2019-20 NHL season saw their recent 6-game winning streak come to an end at the hands of the Coyotes on November 11, but they still own the crown as the top team in the NHL right now. Prior to the season, the Capitals had the 11th-best odds to win the Stanley Cup after enduring years of playoff frustration, they finally got over to the franchise’s first Stanley Cup in 2017-18 and the club is once again looking like a legitimate championship contender.

The Capitals have tinkered their depth by signing forwards Richard Panik and Garnet Hathaway each to a 4-year contract and acquiring defenseman Radko Gudas in a swap with the Philadelphia Flyers for defenseman Matt Niskanen. They also re-signed forwards Carl Hagelin for 4 years and Jakub Vrana for 2 years and signed forward Brendan Leipsic to a 1-year contract. The Capitals are still expected to be a dangerous team in 2019-20, but the next few months will be telling for GM Brian MacLellan’s long-term vision for his franchise, and if he’s ready to embrace a more youthful movement. 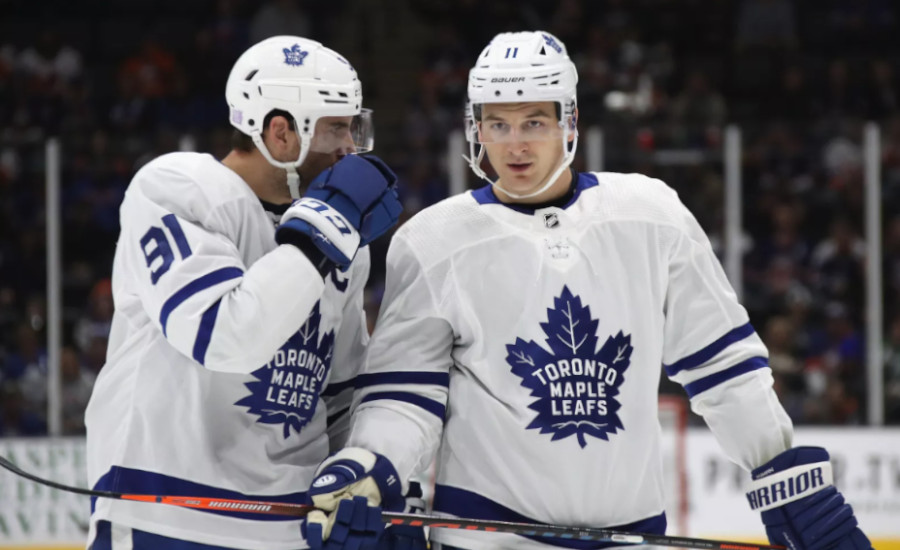 The Toronto Maple Leafs were also knocked out in the 1st round and they are also the favorites to lift the Stanley Cup this season. Last year, they looked like the best team in the NHL for the first part of the season before declining towards the end of the season. If they can bring back their game and outplay the other teams, they will certainly be able to contend with Tampa Bay in the Eastern Conference. The Toronto Maple Leafs saw their odds change over the past week, bumping them up from the 6th overall favorite to the 3rd position. Obviously one of the more active teams this offseason, the Leafs saw several players come and go this summer.

At the end of offseason, the Toronto Maple Leafs were able to come to terms with last season’s leader in team scoring – Mitch Marner. They were also able to make a few under-the-radar moves which bolstered their depth and will ensure them a little insurance, in case anyone would fall to injury in the season. The team lost long-time mainstay Jake Gardiner but acquired young stud defender Tyson Barrie from the Colorado Avalanche in exchange for Kadri. They also added Jordan Schmaltz from the defending Cup champions – the St. Louis Blues. These two join Ceci and Harpur as the newest additions to a team that still stays solid with experienced defenders such as Morgan Reilly, Jake Muzzin and Martin Marincin. They will also have Frederik Andersen between the pipes and he will be backed-up by former Winnipeg Jets goaltender Michael Hutchinson. In fact, the back end of the Toronto Maple Leafs could be the strongest it has been since before the 2005-06 lockout. 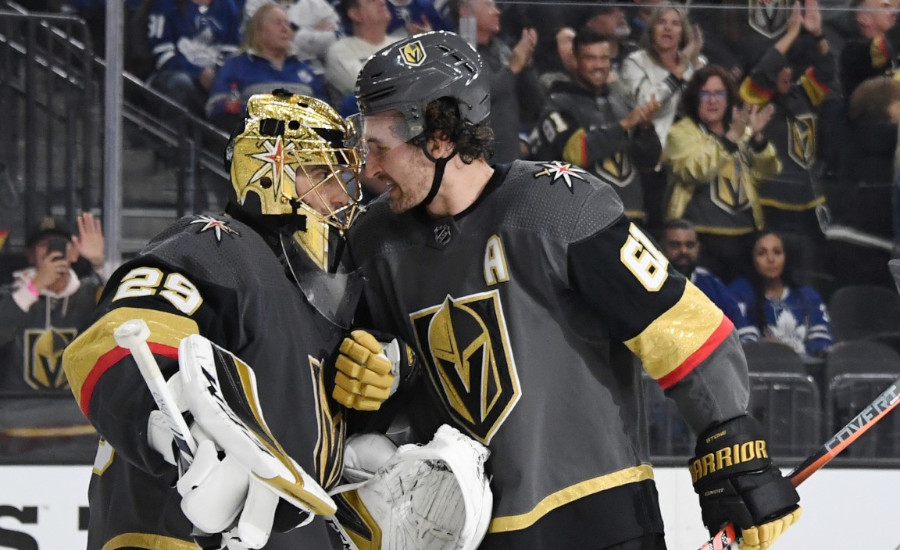 The Golden Knights head into their 3rd NHL season as a franchise and for the 3rd season in a row they are one of the favorites to go the distance. Since shocking the world and becoming the 1st expansion team to reach the Stanley Cup finals, the Vegas Golden Knights have remained a force to be reckoned with around the league. Possibly the most exciting element heading into the 2020 season will be watching how Mark Stone acquired at last season’s trade deadline from the Ottawa Senators, will perform in his 1st full season with a roster that has a lot more to offer him.

Their head office brass also pulled of a monster of a deal when they managed to sign forward William Karlsson to an 8-year extension at only a $5.9-million annual average. Players who struggled last season also found success in the playoffs, such as other trade deadline acquisition Max Pacioretty. The prospect of a Pacioretty, Stone, and Paul Stasny line should have other teams on high alert. Vegas also moves forward with a young but solid defensive core backstopped by multi-time Stanley Cup champion goaltender Marc-Andre Fleury. In fact, this season we will most likely see the veteran goaltender reach the milestone of his 450th career win as he enters the 2019-20 NHL season with 439 wins. 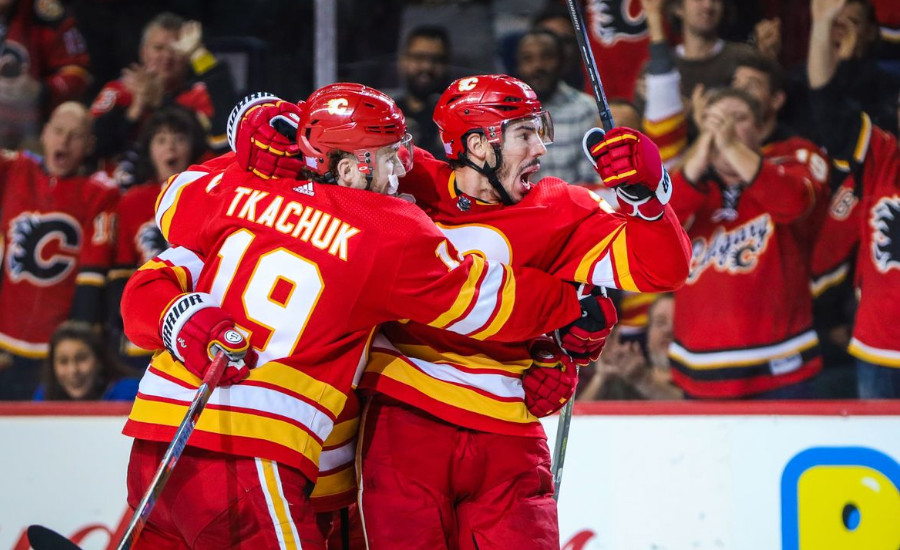 The Flames’ top contracts come with a timestamp, assuming that no trades are made between now and then, it may come to a point where they will not be able to afford their top players anymore. As much as we would all love Johnny Gaudreau to be forever a Flame, if his skill continues to rise, it may just not be financially feasible anymore. The Flames locked Gaudreau down for 6 years in October of 2016, meaning he enters into his 4th year this upcoming season. If there is an outside chance that these are the last 2 years of the Gaudreau era in Calgary, it is in the team’s best interest to use the time wisely. Centering Gaudreau is Sean Monahan, who also signed a long term contract in 2016. Monahan was penciled in for 7 years and the duo has been an electric part of the Flames top line ever since they started playing together.

This year brings a hopeful duo of David Rittich and Cam Talbot, but after going through 7 full-time goalies since the times of Miikka Kiprusoff, the club does not show any signs of upsetting the pattern. The way this team came together last year shows that the pieces are all there, with the young talents and dynamic chemistry between the lines, the window for success appears to be in the next 2 or 3 years. What is left to figure out is how they will use it and if the results will reflect the potential of this team.