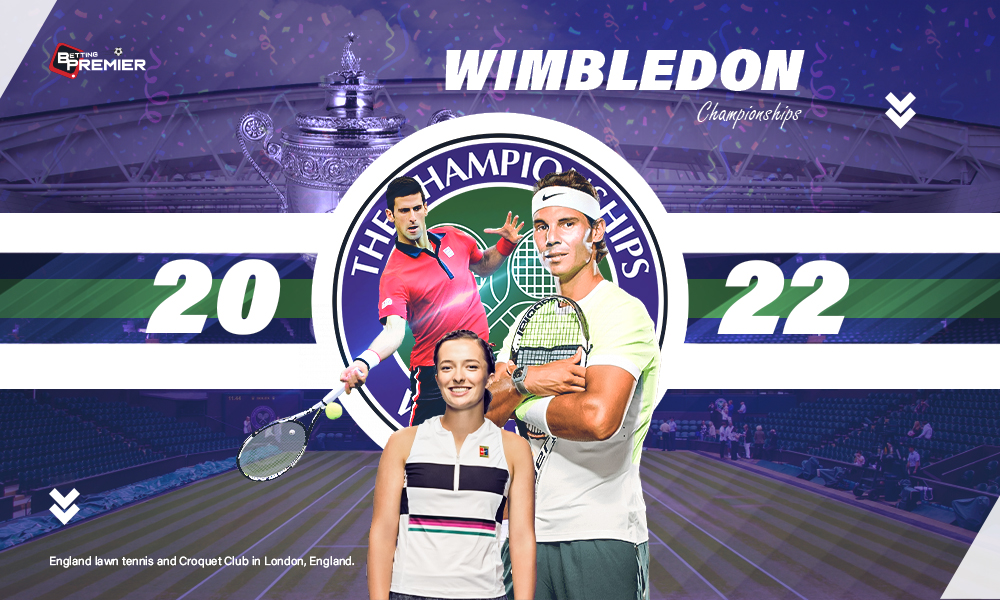 It is that time of the year when tennis comes home, to the retractable grass courts at the All England Club in London. The 135th edition of the Championships, a.k.a. Wimbledon, is underway and will culminate with the Ladies’ and Gentlemen’s finals to be held on the second weekend of July. Fans will snack on strawberries and cream on the stands and watch as the elite of the sport compete for the most prestigious tennis trophy, donning all-whites.

The grass will miss eight-time champion Roger Federer. Novak Djokovic and Rafael Nadal start as the favourites. The former is the defending champion, whereas the latter is coming off a record-extending victory in the French Open. The Spaniard now has 22 Grand Slam triumphs to his name. He could very well be headed for a calendar slam, a feat no player has pulled off in over half a century.

Much to the disappointment of the fans, the tournament will not feature the World No.1 and No.2 in the Gentlmen’s category. Russian players have been banned from the tournament, as have Belarusian ones, on account of Russia’s invasion of Ukraine. That means no World No. 1 Daniil Medvedev and no eighth-ranked Andrey Rublev.

Second-ranked Alexander Zverev has been forced out of the tournament as he is yet to recover from the ligament damage he sustained in the French Open semi-final clash against Rafael Nadal. Djokovic and Nadal are the top seeds, and if they meet for the 60th time, it will be in the final. Another interesting plot is the return of Serena Williams. Without a competitive match in a year and currently ranked 1204th, the seven-time champion will be hoping for a historic victory in the women’s category.

Top-seed Iga Swiatek is on a 35-match win streak. The 21-year-old arrives in London having bagged her second French Open title. Defending champion Ashleigh Barty retired earlier this year, while Naomi Osaka has pulled out due to injury. For the first time in Wimbledon history, 10-point tie breaks will be in place. BettingPremier‘s take on the major matchups will follow.

Where to watch Wimbledon 2022?

ESPN and Tennis channel will broacast the tournament in the United States this year.

For the fans in UK, BBC and Europsort UK are the destinations.

TSN Canada is the exclusive broadcaster of Wimbledon 2022 in Canada.

Those in Australia can tune in to Nine to catch live action.

Sky Deutschland and ZDF are the broadcasters in Germany.

Polsat is the sole destinastion for the fans in Poland.

The following stars are some of the prominent contenders in the game of tennis and have established themselves as favorable candidates to win Wimbledon 2022.

The following stars are some of the prominent contenders in the game of tennis and have established themselves as favorable candidates to win Wimbledon 2022.

Top seed Novak Djokovic will lock horns with ninth seed Cameron Norrie in the semifinals of the 2022 Wimbledon Championships this Friday. 2022 has not been the Serbian’s year, at least not yet. Djokovic could not play at the Australian Open, having failed to comply with Australia’s vaccination policies against COVID-19. The 20-time Grand Slam champion’s French Open campaign ended at the hands of Rafael Nadal, who went on to win the tournament.

However, Djokovic is bouncing back, having reached the semifinals of the Wimbledon Championships. He showcased a stunning 5-7, 2-6, 6-3, 6-2, 6-2 comeback win over Jannik Sinner in the quarterfinals after dropping the first two sets. This marks Djokovic’s 11th semifinal appearance at Wimbledon. The win over Sinner saw the 35-year-old extend his win streak to 26 matches on grass.

Cameron Norrie is having a terrific season himself, with two title wins this year. On his road to the semifinals, Norris has taken down the likes of Tommy Paul and Steve Johnson. He was pitted against the in-form David Goffin in the quarterfinals, whom he defeated in an epic five-set battle to reach his first ever Grand Slam semifinals.

Norrie is only the fourth British man to make it to the last four of Wimbledon in the Open Era. Djokovic and Norrie have met once at the 2021 Nitto ATP Finals, where the Serb beat the Brit in straight sets. Djokovic has the upper hand in virtually every aspect of the game, but he will have to take on the partisan crowd as well. Djokovic is the favourite to make it to the final.

World No.2 Ons Jabeur will square off against 17th seed Elena Rybakina in the ladies’ singles final of the 2022 Wimbledon Championships on Saturday. Neither player has won a Grand Slam before, so the matchup will be nothing short of a battle. Jabuer has been on a fantastic run of late. She won in Madrid this year, her biggest title win so far. She also ended up runner-up in Charleston and Rome.

Despite having been knocked out in the first round at Roland Garros, the Tunisian native rebounded on grass to fame and stardom. She is currently on an 11-match win streak that includes the run-up to the title in Berlin. On the other hand, Elena Rybakina started the year in spectacular fashion. She made it to the final in Adelaide, albeit losing to Ashley Barty. A slew of injuries made it impossible for the Kazakh to perform well in 13 of the 14 tournaments she played before Wimbledon, barring the BNP Paribas Open, where she reached the quarterfinals.

Grass seems to be the 23-year-old’s comfort zone. In her run-up to the final, she brought down Bianca Andreescu, Qinwen Zheng, Petra Martic, and Ajla Tomjanovic before defeating former champion Simona Halep in the semifinals. Jabeur has been the more consistent player and can apparently handle pressure better than the Kazakh. Jabeur will almost certainly win, becoming the first Arab and African to win a Grand Slam in the Open Era.