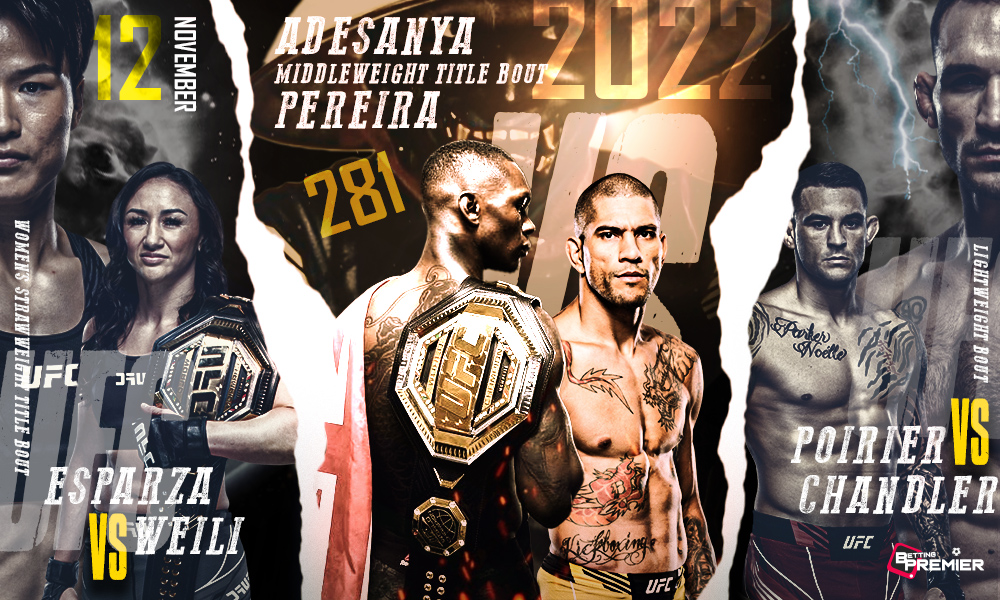 UFC 281 has one of the strongest rosters of the year. With the UFC middleweight championship at stake and a chance for potential answers to lingering questions about their rivalry, it’s time for Israel Adesanya and Alex Pereira to share the Octagon. Adesanya, who is unbeaten at middleweight, has already successfully defended his championship against Robert Whittaker and Jared Cannonier twice this year, reiterating his position as the best boxer in the 185-pound weight division. With victories over Sean Strickland and Bruno Silva, Pereira stamped his way to this championship shot, returning full circle to his UFC debut last year against Andreas Michailidis.

Israel Adesanya is a pro kickboxer, MMA fighter, and former boxer who have won several titles in all three sports. He holds the title of middleweight champion in UFC and is ranked No. 2 in the UFC men’s pound-for-pound chart as of August 23, 2022. Adesanya is considered one of the finest strikers in the world and has never been thrown to the ground. Pro MMA fighter and former kickboxer Alexsandro Pereira has participated in events including the SUPERKOMBAT Fighting Championship and ‘It’s Showtime.’ He is ranked No. 4 in the UFC middleweight charts as of September 5, 2022. Adesanya and Pereira were middleweight Glory champions in Kickboxing, with Pereira winning the championship in each of the three weight classes. Keep reading to learn about BettingPremier’s breakdown of the most anticipated event.

Details of UFC 281: Adesanya vs. Pereira

ESPN network broadcasts the event in the United States and on its OTT platform ESPN+, which offers live streaming for its subscribers.

BT sport will officially broadcast UFC in the U.K.

In Canada, BELL holds the right to broadcast the fights this year.

The official website of UFC offers a UFC fight pass for viewers and fans worldwide to live stream the event based on a subscription.

Viewers in Australia can watch the fight on Kayo as a PPV event.

At UFC 276 in July, Israel Adesanya defeated Jared Cannonier by a majority decision to keep the top position at middleweight. The 185-pound champion appears poised to firmly establish himself as possibly the greatest middleweight champion ever when he confronts his old adversary from Glory Kickboxing. His opponent, Alex Pereira, is 6-1 in mixed martial arts and boasts a kickboxing background that includes 21 knockout wins and five finishes. ‘Poatan’ defeated top middleweight prospect Sean Strickland, in the opening round of his most recent UFC fight in July.

Not to add that Pereira has two wins over the current middleweight champion in Kickboxing. The only combatant to ever defeat Adesanya in any combat sport is “Poatan.” The Brazilian lacks the background of other top competitors in the class because he is a relative newcomer to mixed martial arts. Therefore, the champion will probably prevail despite the Brazilian’s superior kickboxing abilities, which are a significant reason for Adesanya’s triumph in the MMA realm.

The Pick: Adesanya via KO