On the night of UFC 248, Israel Adesanya will defend his UFC middleweight title against Yoel Romero at Las Vegas this weekend. The bout will be the headliner on a stacked fight card which will also witness Joanna Jedrzejczyk take on Zhang Weili for the Women’s Strawweight title.

The undefeated New Zealander will be looking to claim his 19th straight UFC win on Saturday as he heads into this fight, having destroyed Robert Whittaker last October. His opponent, the 42 year old fight veteran Romero has lost 3 of his last 4 UFC bouts including a decision defeat to Whittaker in UFC 225 which took place in June 2018.

What time is it starts?

The live stream of UFC 246 will starts at 10 PM Eastern Time. Check out the complete broadcast time below.

You can live stream the event via:

A UFC Women’s Strawweight Championship bout between the current champion Zhang Weili and former champion Joanna Jędrzejczyk is expected to take place at the event. 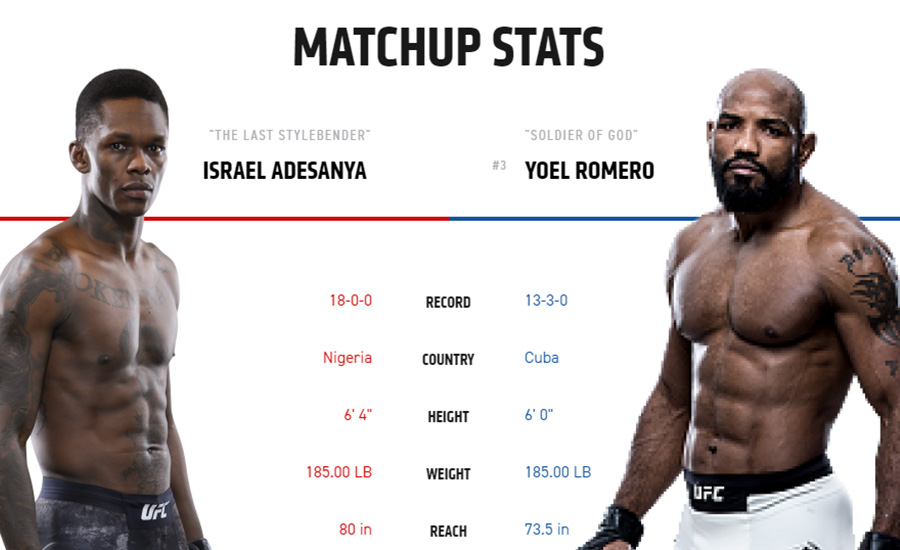 Adesanya is undefeated and recently became middleweight champion when he knocked out Robert Whittaker in October of last year. Also notable, Adesanya had an awesome fight against Kelvin Gastelum where he answered a lot of questions regarding durability and composure.

Adesanya has incredible striking abilities, a gifted puncher and kicker and has great unorthodox knees and elbows to top it all off. He can finish opponents in all kinds of ways. Adesanya is a very technical fighter but he still finishes his fights. Adesanya has big advantages in height and reach against Romero.

With Romero’s scary KO record, he’s only won twice in the last 4 years. Yoel is 2-3 in his last 5, losing all 3 by decision. There is little doubt that age is starting to affect Romero. Most notably the two Robert Whittaker fights where he absorbed 192 combined significant strikes and 106 of those were to the head. Adesanya will be the much younger and fresher fighter and will look to stay on the outside to outstrike Romero. Adesanya moves around well and switches stances making him hard to hit.

Romero is expecting a fight like the one he had with Rockhold, but Adesanya is younger, fresher and faster and likes to push the pace. Romero has had cardio issues in the past, so it’ll be interesting to see how his gas tank holds up against the champion.

Betting Odds are provided by Bet365. 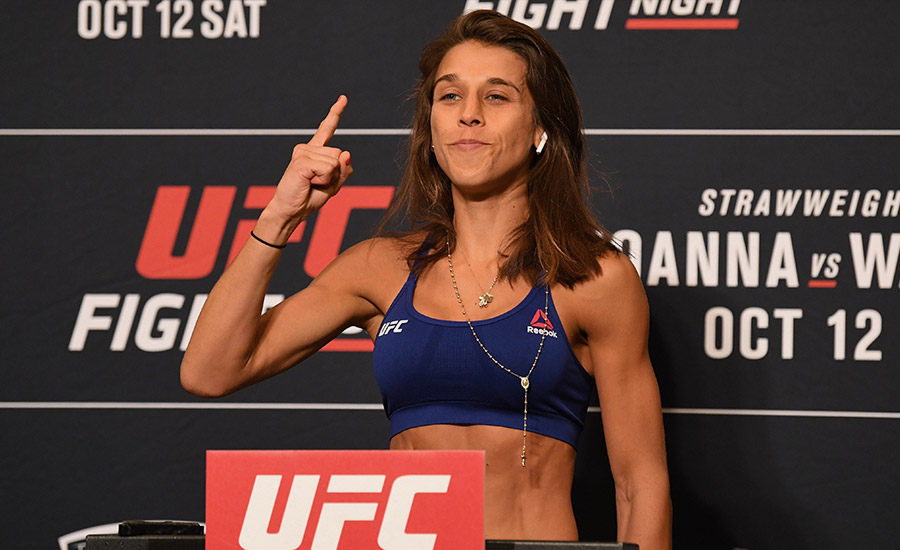 The first championship fight of the night features Chinese sensation Weili Zhang who defends the crown that Joanna Jedrzejczyk kept clean for over two years. After her decision win over Tecia Torres, Zhan was riding a monster 19-fight win streak and finally proved she can hang at the top of the division. She was then awarded a title shot on home soil against the new champion Jessica Andrade. Everything was set up perfectly for her and she did not disappoint, ruthlessly putting Andrade away in the first round with a flurry of knees and punches.

After 5 title defences, Jedrzejczyk lost the belt to Rose Namajunas and failed to avenge that in the rematch. She got back in the winning column with a decision win over Torres but then met the assassin Valentina Shevchenko up at flyweight for the vacant title. She was outclassed in the end but bounced back with another decision win over Michelle Waterson and now she has the chance to recapture the title that became a huge part of her identity. 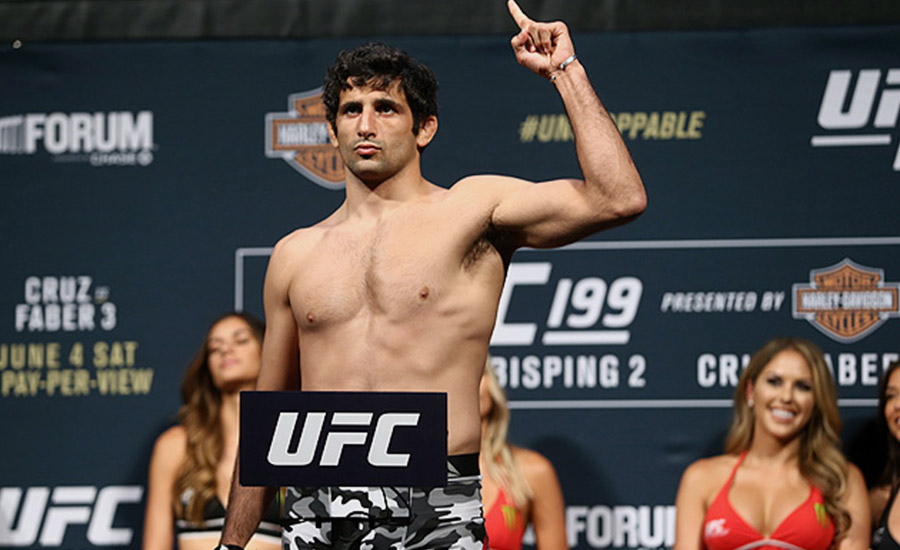 Klose only has one loss on his blossoming record, to David Teymur back in 2017. This was after winning his first 2 UFC fights and since his loss he is also on an impressive 3 fight winning streak, earning classy unanimous decisions over Lando Vannata, Bobby Green and Christos Giagos. 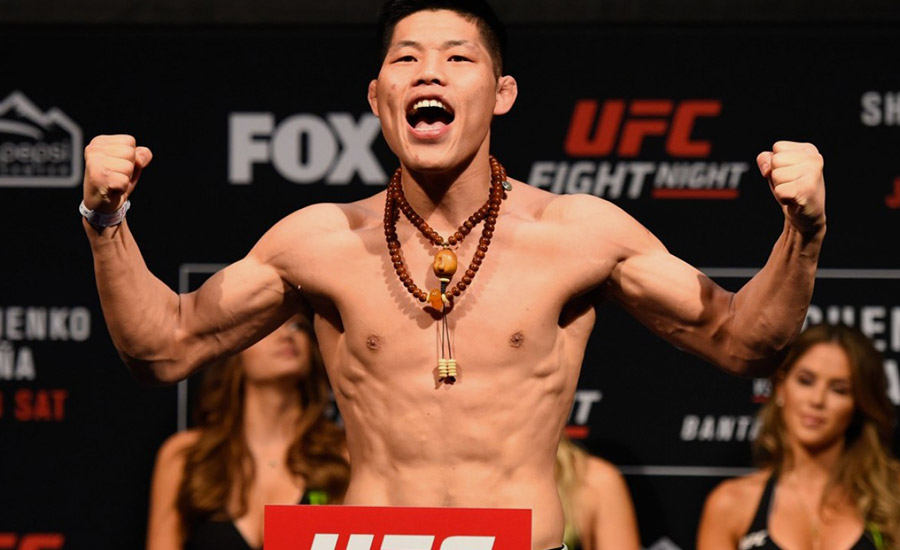 Neil Magny has a date and opponent for his next UFC bout – the welterweight veteran, who has been dealing with a USADA issue over the past few months, will meet Chinese 170-pounder Li Jingliang at UFC 248 in Las Vegas, on March 7. Magny (21-7) hasn’t fought since a 4th round TKO defeat to Santiago Ponzinibbio in the main event of UFC Argentina in November 2018. Magny was coming off wins over Carlos Condit and Craig White prior to that defeat in Buenos Aires.

Jingliang (17-5) is riding a 3 fight winning streak in the Octagon, capped off by a thrilling late knockout of Elizeu Zaleski at UFC Shenzhen in August. “The Leech” has won 7 of his last 8 in the UFC with 5 knockout stoppages. Jingliang won’t be the only Chinese star in action at the T-Mobile Arena that night, as strawweight champion Zhang Weili is set to defend her throne against Joanna Jedrzejczyk at UFC 248. 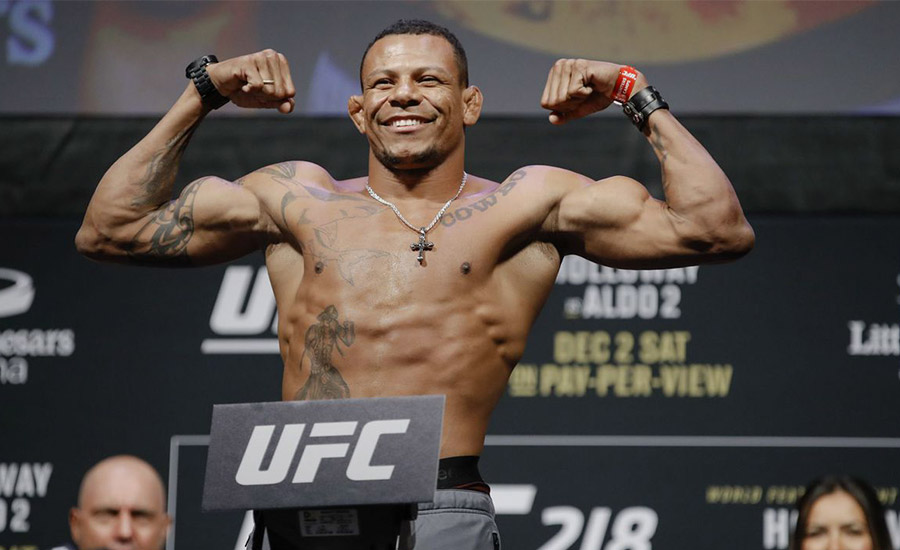 Two welterweights desperate for a win kick off the main card as Alex Oliveira and Max Griffin look to bounce back from losses. Oliveira is coming off 3 losses in fact, completely foreign territory for the veteran. After efficiently submitting Carlos Condit and knocking out Carlo Pedersoli Jr, Oliveira met Gunnar Nelson. There he suffered a gruesome cut courtesy of an Icelandic elbow before Nelson slipped in a rear-naked choke to finish the Brazilian. He then suffered 2 more losses – a split decision to Mike Perry and a unanimous decision against Nicolas Dalby.

Griffin is also coming off a unanimous decision loss. After a split decision win over Zelim Imadaev he lost to Alex Morono which has taken his UFC record to 3-5. Griffin has struggled to make inroads in the division and must feel another loss could be fatal to his UFC career so he will need to pull off one of his best performances to get past Oliveira.

O’Malley (10-0-0) has already picked up 2 victories under the UFC banner, having defeated Terrion Ware and Andre Soukhamthath. He has also competed on Dana White’s Tuesday Night Contender Series Episode 2, defeating Alfred Khashakyan by first round knockout. O’Malley is going to be back in action for the first time in almost 2 years, as his last bout took place at UFC 222 in March of 2018.

Quinonez (8-3-0) has won 5 of his last 6 in the UFC, with those wins coming over Leonardo Morales, Joey Gomez, Diego Rivas, Teruto Ishihara and Carlos Huachin. Quinonez made it to the finals of the UFC Ultimate Fighter Latin America 1, losing to Alejandro Perez in the finals of the reality show. Quinonez has picked up 8 wins as a professional MMA fighter and 5 of them came by way of decision.

Legacy Fighting Alliance alumni Austin Hubbard has his 3rd outing inside the octagon set and will face Olympian Mark O. Madsen (9-0) at UFC 248. The fight will be Madsen’s first bout outside his native Denmark. Hubbard claimed LFA’s lightweight championship in December 2018 with a finish of Killys Mota. He then made the jump to the UFC, dropping his debut against Davi Ramos at UFC Rochester last year.

The Danish athlete claimed the silver medal in Greco-Roman wrestling at the 2016 Olympic Games in Rio de Janeiro, Brazil. At that point, he’d already picked up a pair of wins inside the cage, but he went all-in come 2018, competing 4 times that year, never looking back. Madsen made his UFC debut this past September at UFC Copenhagen, stopping Danilo Belluardo with punches in just over a minute.

Brazilian jiu-jitsu legend Rodolfo Vieira has a date and an opponent set for his next Octagon appearance. The UFC announced on Tuesday that the 5 time BJJ world champion and ADCC gold medalist will take on Saparbek Safarov at UFC 248, a pay-per-view show scheduled for March 7 in Las Vegas.  “The Black Belt Hunter” made his UFC debut in August, submitting Oskar Piechota with an arm-triangle choke at UFC Montevideo.

The grappling wizard holds a perfect 6-0 record with six stoppages in MMA. Safarov (9-2) scored his first UFC win in March 2019, defeating Nick Negumereanu via decision after losing to Gian Villante and Tyson Pedro. The 33-year-old Russian will be making his middleweight debut against Vieira.

Both Gerald Meerschaert (30-12) and Deron Winn (6-1) will collide at middleweight at UFC 248, which goes down on March 7. Meerschaert has dropped 3 of his last 4 outings, most recently a split decision loss to Eryk Anders at UFC Fight Night 161 in October. He has finished his opponent in each of his 5 Octagon appearances, including his last 2 by technical submission.

Winn tasted defeat for the first time in his career when Darren Stewart edged him via split decision at UFC on ESPN 6 in October. The loss snapped a 6 fight win streak that saw him beat names including Eric Spicely in his promotional debut as well as Tom Lawler. Once competing for Bellator MMA, the American Kickboxing Academy prospect won his first 4 fights by first-round knockout.

Emily “spitfire” Whitmire (4-3) is making her 5th UFC appearance against Polyana Viana. She can both grapple and strike. Her opponent, Polyana Viana, is coming off a 3 fight losing streak in the UFC. Viana will try to get this fight to the ground, as she likes to pull guard in fights and she is confident in her submission skills. She holds 6 wins due to submission.

Meanwhile, Whitmire has only been defeated via submission in her career. Whitmire is the better striker, but lacks head movement and keeps her head right in the centerline, making it easy for Viana to crack her with a few jabs to distract her and take her down.

Argentina’s Cannetti (8-4 MMA, 2-3 UFC) will return to action for the first time in almost 16 months. In his most recent outing at UFC Fight Night 140 in November 2018, Cannetti had the opportunity to fight on his birth country’s inaugural UFC card. However, his homecoming was spoiled when he was submitted in the second round by Marlon “Chito” Vera. As for Batgerel (6-2 MMA, 0-1 UFC), the 30 year old Mongolian fighter made his promotional debut in August against fellow UFC newcomer Heili Alateng. While the unanimous decision wasn’t judged in his favor, Batgerel walked away with an extra $50,000 for “Fight of the Night” honors.