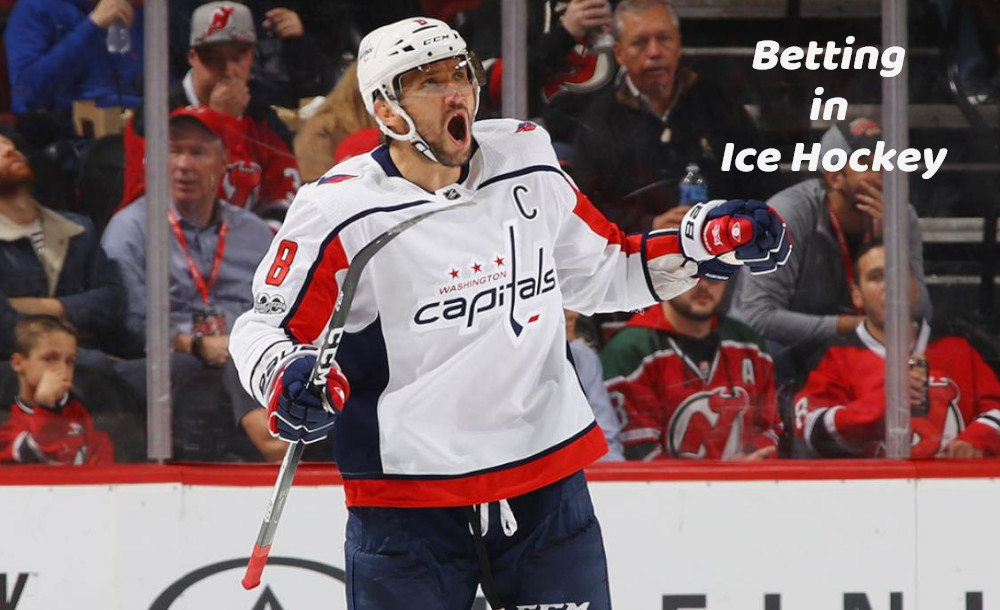 Ice hockey is a team sport most popular in the Nordic countries, Russia, central and eastern Europe, Canada, and the United States. Ice hockey has been in existence since the 18th century, but the international professional ice hockey was renowned in the United States in 1904.

In 1908 the International Ice Hockey Federation (IIHF) was formed which is the official governing body of the quadrennial Olympic tournament, World Ice hockey Championships, and the IIHF World Ranking. The sport includes numerous leagues and national championships hence increasing the chances of betting.

Types of betting in Ice hockey

The most popular betting type in an ice hockey event is the outright bet also called the future bet. The concept of this bet is very simple, the bettor has to fix the team that he thinks will win the game. The payout is high yet the bettor has to wait till the season gets over to get his payout. Unlike the static odds at the beginning of the season, the bookmaker alters the odds as the game proceeds like if a strong player gets injured then the team is less likely to win, but the bookmaker increases the odds of that team.

For example, a minimum of +800 odd is fixed on the Stanley Cup winner in the beginning of the season which means, the bettor has to wage $100 to make a profit of $800. Even if the bettor bets on seven different teams he would wager $700 and would make a profit of $100 if any one of the seven teams wins.

As the name signifies, total bets are wagering on the predicted combined score of the two teams. The outcome of an individual team is not taken into account instead the combined score of the teams which can be 5-0 or 5-5 or 0-7 are added and a single value is wagered. Generally, the bookmaker fixes a score of 5.5 as the line since half points are not awarded in the game. Hence the bettor has an advantage of betting on either over or under as the points may be either 6 or 5.

For example: If a bettor bets under 5.5 and the final scoreboard displays 2-2, a shootout will be granted to the teams and the shootout winner will claim the trophy. Since no ties are possible in an ice hockey, the final score will be either 2-3 or 3-2 making a total of 5. The bettor bags the amount wagered and the odds placed on an under 5.5 point.

If a bettor bets on the Stars then they must net more than 2 goals to win the game. According to the example, if a bettor wagers $100 on the Stars and they score 2 or more than 2 goals then a profit of $45.45 is taken by the bettor. If it had been money line betting then an odd of -350 would be fixed on Stars for any number of goals. A $100 wager on the money line would profit only $28.57. Puck line offers higher payouts if a bettor is sure about the points in the scoreboard.

The correct score demands exact prediction of the number of goals the teams will net. If a tie score is expected before the regulation time then the bettor can also place wagers on a tie scoreline.

For example, if a bettor is confident that the Edmonton Oilers will rout the Philadelphia Flyers 4-1 then wages can be placed on that scoreline. If a bettor strongly believes that the scoreline will be tied by 3-3 before the 60-minutes regulation time then he can place bets on that exact score.

The money line betting in ice hockey is to bet on a team which a bettor might believe will win the match. The bettor can either bet on an underdog or on a favorite or on both in a money line bet. Generally, the odds are high for an underdog in a money line bet. The payout will initially be the same, but the bookmaker moves the line back and forth as the sportsbook objects to even the playing field. Consider the following example: 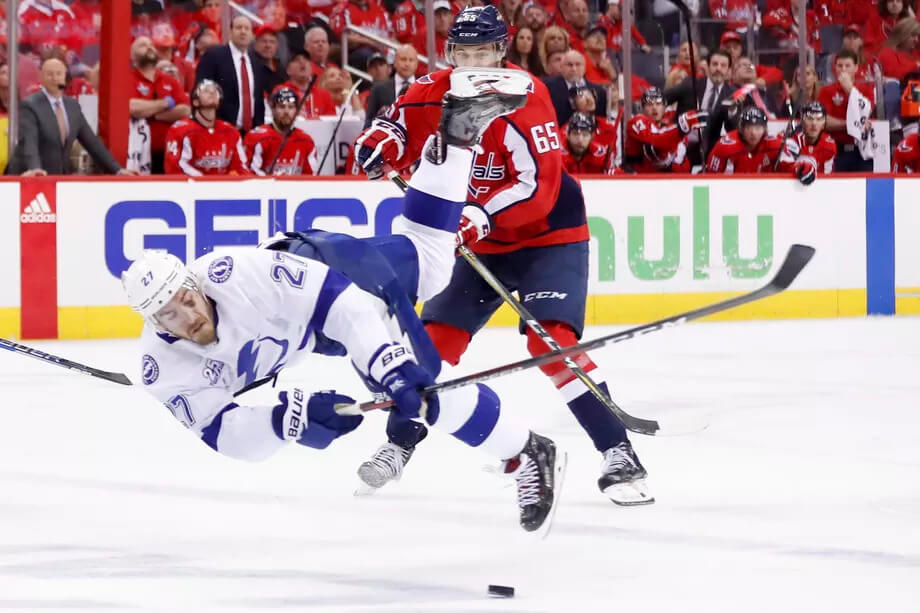 The only difference between a Point spread and a Puck line is the variant range of points provided to the teams. The point spreads 2.5 and 3.5 are also included with the standard puck line 1.5 point. Since ice hockey is a low-scoring sport, the higher point spread provides high payouts for the favorites whereas the underdogs are less favored.

In ice hockey the goals netted and the calculation of the score is the same as in other sports. The only difference is that there are no draws in this sport. In case of an equal score at the end of the 60-minutes regulation time, extra time is given and the team to net the first goal wins the match. Bets can vary according to this scenario as follows:

A standard 60-minutes regulation time is maintained in a competitive ice hockey tournament with 20-minutes intervals. Bets are placed on the outright winner of the match without any extra time needed. Hence if the team on which the bettor has bet loses on the regulation time but wins during the extra time is not considered a victory. Therefore the bet is lost by the bettor. 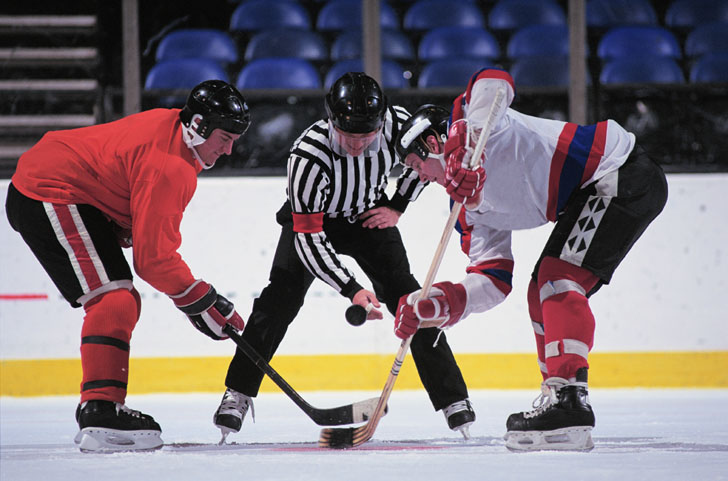 End of the period including the extra time

If both the teams end with an equal score after the 60-minutes regulation time, then an overtime is issued to the teams. As per the Golden Goal rule, the team which nets the first goal wins the match. This bet is one of the straightforward bets in which a bettor has to bet on a team which he thinks will leave the ice victorious netted during the regulation time or during overtime.

The proposition bet demands an advanced knowledge about the statistics. The bets are wagered depending upon the strategy a team follows and the style of a player. While placing a proposition bet, only till the event occurs the bet is valid. Bets are placed on various predictions of the event. A detailed explanation is given below to understand the concept of a proposition bet.

Which team will net the first goal?

Will there be a goal in the second interval?

Will the game end with an odd score or an even?

A parlay can also be called as the multiple bets. The parlay pays off only when all the wagers placed on more than one team wins. The parlay bets demand smart work like if the teams have defensive struggles due to weak goaltenders then the bettor must parlay the over. The money line and the over/under bets can be combined as a parlay bet whereas the puck line with the over/under cannot be parlayed.

Leagues in Ice Hockey to bet on

The National Collegiate Athletic Association conducts the college level sports. It is a non-profit organization which organizes the athletic events in Canada and the United States. In 1980 the NCAA gained a huge income from the televised college football. Since the NCAA is a popular college system in the United States, the bookmakers grab the chance of betting. Appropriate betting odds are fixed on teams and evaluated in the same way as the NHL bets.

The American Hockey League originated from the two former leagues the Canadian-American League formed in 1926 and the first International Hockey League founded in 1929. The AHL is known as the highest-level minor league or ‘AAA’ minor league which comprises of 31 teams. Suitable bets are applied on teams or on an individual player by bookmakers according to the stats maintained by the sportsbook.

The Kontinental Hockey League was formed in 2008 which consist of 24 teams. The KHL is an international professional ice hockey league which awards the Gagarin Cup to the winner of the annual league playoff champion. Around 35 different clubs have taken part in the KHL since its establishment in 2008. Irrespective of the country the club represents the winner of the league is awarded the KHL Champion title and the Russian Champion title. With many divisions and conferences available in a KHL a bettor has a wide range of betting options to choose from.

The Swedish Hockey League was founded in 1975 which features 14 teams at present. The battle among teams in the SHL is for the prestigious Le Mat Trophy and the Swedish Champions title. Since there are no further divisions in an SHL the only advantage of betting is the regulation time. Each match has a 20-minutes interval making up to a total of 60-minutes. Bets can be placed on the intervals and if the result is a draw then an extra time of 5-minutes or more can be availed.

The National Hockey League is originated from the National Hockey Association in 1917. The teams of the NHL fight for the prominent Stanley Cup which is awarded to the playoff champion at the end of the season. A total of 31 teams make the National Hockey League 7 from Canada and 24 from the United States. The regular season of NHL follows a point system and the team with the highest point at the end of the season claims the Presidents’ Trophy. The bookmaker provides adequate betting odds on the various geographic divisions.

The Ice Hockey World Championships are conducted annually unlike the Olympics, which is hosted once in every four years intervals. The top 16 national teams participate in two different divisions and if more than 40 teams compete then a third division is organized. In 1920 Summer Olympics the first Ice Hockey Championship was conducted. The World Championship as an individual event was held in 1930 with 12 competing nations. Odds on an individual team, on an individual player, will be fixed by the bookmaker and the most appropriate bets are to be chosen.