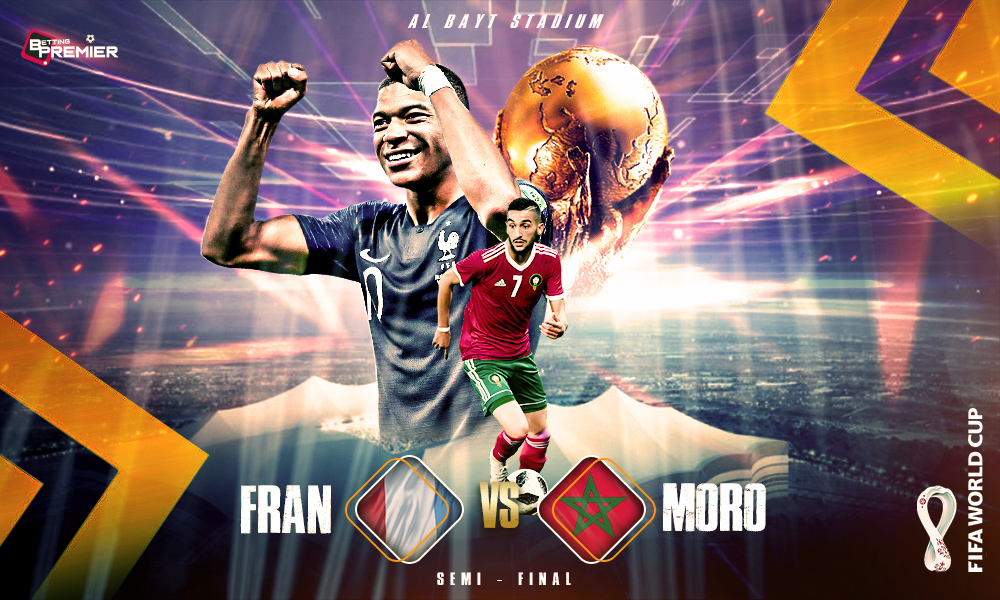 France and Morocco finally head into the Semi-finals in the FIFA World Cup 2022 fixture scheduled on Wednesday at Al Bayt Stadium. Morocco previously beat Portugal 1-0 to become the first African nation in the Arab world to enter the Semi-finals in the history of FIFA. There are no words to describe this match, as it has gone up in the list of the biggest upsets of 2022. A lot unfolded that day. France’s 1-2 victory against England marks one of the most exciting matches to date. The defending champions once again proved that it takes a lot to beat them, but will they remain victorious in the semi-finals? It is yet to be witnessed. It’s a classic David vs. Goliath battle as underdogs go up against champions. There is just one step away from the ultimate Finals. Morocco has come this far, so it is wise to assume they won’t back down for any reason. But without a doubt, they will be facing their fiercest challenge yet in France.

French appears to have evolved during the competition and are poised for a march to the finals. Morocco’s defense will be a factor if they’re going to pull off yet another surprise upset. The African squad has only let up one goal in Qatar, which was against Canada in the group stage, and will need that defense to hold up against a French team that has scored two or more in each World Cup game so far. Antoine Griezmann has produced the most opportunities (17), while Achraf Hakimi has made the most interceptions (19), with the second-most effective tackles (15). At this juncture, it is essential to note that no team has advanced to back-to-back World Cup finals since Brazil in 1994 and 1998. Also, no team has won the World Cup twice since Brazil in 1958 and 1962. In the history of the World Cup, the same two teams have never faced off in back-to-back finals. Continue reading to learn about BettingPremier’s breakdown of the game.

Details of France vs. Morocco

How to Watch France vs. Morocco

Let us unpack what happened on Saturday night. Morocco’s defense was too much for Portugal’s offense; they could barely convert chances into goals. Whether benching Ronaldo for the first half was a good decision, they did not anticipate Morocco to be this good. Youssef En-Nesyri’s tall and leaping header is a carbon copy of prime Ronaldo. The perfect moment caused the Moroccans to realize their single-goal victory against the Portuguese. Goalkeeper Diogo Costa’s early stretch from his post to catch the ball was a brutal mistake. This was the final chance for Cristiano Ronaldo to win the World Cup, but it ended in futile. It was already time for him to pack his bag and head home. Fans were so heartbroken to see him march into the tunnel, unable to control his emotions. Portugal should have learned better from Morocco’s knockout match against Spain. No one midfielder and forward in Portugal could score past Morocco’s resilient defense, thanks to Yassine Bounou, the goalkeeper. Morocco is packed with the best players like Hakim Ziyech, Achraf Hakimi and Youssef En-Nesyri. But most of the key players have sustained injuries lately. Even though France should be cautious and be the ultimate opportunist to strike down their ironclad defense of Morocco. France will find it extremely hard to dismantle Morocco.

Despite giving up long periods of possession to England, France managed to outlast them in the first half. The game was over after 90 minutes due to the missed penalty kick, which came 6 minutes after Olivier Giroud had given France the lead again. Harry Kane, the captain of England, was previously denied a penalty in the first half following a tackle by Dayot Upamecano well outside the box. The slight error cost England the victory. Getting beyond Morocco’s organization and structure will need a Herculean effort. France will know precisely how to approach their opponents, unlike Portugal and Spain, who selected young, inexperienced teams against Morocco and saw them struggle to adjust in a pressure scenario. The key for France in this match will be an early goal because the more they go without one, the more fear will set in, and the more confident Morocco will get.

After the interval against Portugal, Morocco defended fiercely, swinging the match marginally in their favor, but they also benefited from their opponent’s inability to capitalize on their opportunities. Morocco has so far performed sensationally in exposing the flaws of other teams, notably in the mental component of the game. The Atlas Lions excel at wearing down their opponent until dissatisfaction is all left. The French are a unique breed. Denmark, Australia, Tunisia, and England have all thrown punches at Les Bleus, but they have all recovered to win that match or the one after. This France squad never gives up. Morocco will find it tough to score against a side like France because of their open attacking style and strong defense. Antoine Griezmann has been the World Cup’s finest chance generator, and Kylian Mbappe is arguably the best current player in the world. France may have a tough time in this match, but with players like Olivier Giroud and Dembele, the French attackers should be able to score enough to defeat Morocco. But, in the end, who can tell what will happen? This World Cup already proves to be a tournament of the underdogs.