Brazil vs Paraguay Prediction and Odds

The Quarter-final round of the 2019 Copa America has just begun and the first match will be between Brazil and Paraguay. Brazil automatically got advanced to the quarter-final round as they defeated Peru on matchday 3 and topped the Group A table with 7 points.

On the other hand, Paraguay who was on the second place in Group B lost to Colombia and moved down to the third spot, yet they were lucky enough to qualify for the next stage. Brazil is in its best form this season and therefore they are the heavy favorites for this match with 84.7%.

When Will Brazil Face Paraguay?

Having qualified for the quarter-finals, Brazil will play against Paraguay at the Arena do Grêmio. When is the match? At what time will the match commence? Check out the necessary details regarding the match here.

Where can I Find the Live Stream?

The most popular betting site bet365 lets you watch the live action of the Copa America matches on subscription. Once registered, you can stream the live match of many more leagues and matches. Click on the link below to enjoy the match.

Some of the TV channels will telecast the upcoming Copa America match, which we have listed in the table below. Which country do you want us to include? Let us know in the comments and we will add it.

Both the teams will be playing with the ultimate aim of securing a place in the semi-finals but chances are more for the hosting team Brazil to win the match. Have a look at the winning probabilities of both the teams and chances for the match to end in a draw.

Will it be a home win for Brazil? Can Paraguay surprise Brazil with a win? Read on know our prediction for the match.

Will Brazil Qualify for the Semi-finals? 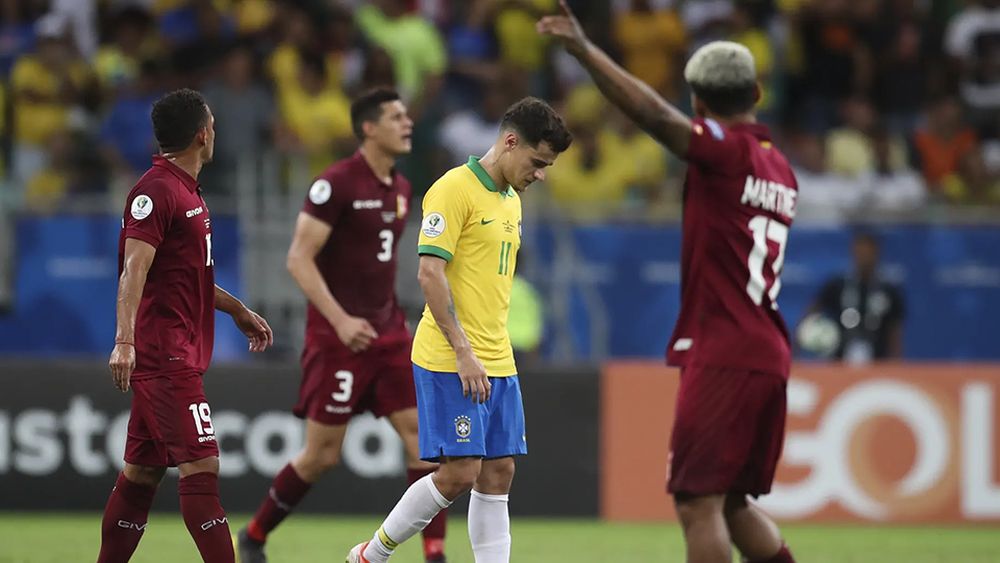 The Brazilians thought Philippe Coutinho had scored in the final minutes of the game, which was denied after VAR review.

Brazil topped the table with 7 Points, which could have been 9 if they hadn’t drawn with Venezuela on matchday 2. They reached the quarter-final, having scored a total of 8 goals, despite a goalless draw match against Venezuela. Without the Brazilian key player Neymar, the team has reached so far and are now looking for another win.

Their previous group stage match was against Peru which ended up in a stunning 5 goals difference win. Peru was able to take 2 shots on target, yet remained goalless until the end of the match. 5 different players of Brazil score 5 goals for the team and sealed a win on Matchday 3.

Can Paraguay Claim a Win?

Paraguay has been lucky enough to advance to the quarter-finals even after a loss against Colombia on matchday 3. Paraguay was on a drawing streak, having played its first 2 matches at Copa America against Qatar and Argentina which ended in a 2-2 and 1-1 draw respectively.

Their previous match against Colombia resulted in a 0-1 loss with Gustavo Cuellar’s only goal at the 31st-minute for the team. Peru managed to score 4 points and advance to the quarter-finals, whereas Japan and Paraguay had the same 2 points. Japan failed to advance because of a goal difference of -4, while Paraguay had -1.

Who Will Advance to the Next Round? – Our Prediction

The quarter-final matches of Copa America will begin from 28th June and the first quarter-final match will be between the hosting team Brazil and Paraguay. Brazil is the obvious favorites for the upcoming match against Paraguay, which has a winning probability of 84.7%.

Both the teams will play with the ultimate aim of securing a place in the semifinal. Brazil has high chances to win the match as the team is in its best form this season, while Paraguay will not go down without a fight and has 7.7% chances to upset the home team.

Check out how Brazil Stun Peru with a 5-0 Win.

Taking into account the Friendly matches, Copa America matches, and WC Qualifiers South America matches, Brazil and Paraguay have played against each other for a total of 79 times. Their overall meetings have resulted as follow:

The table below shows the previous meeting of the two teams. Check out when and where Brazil and Paraguay have met before.