Bolivia vs Venezuela Prediction and Odds 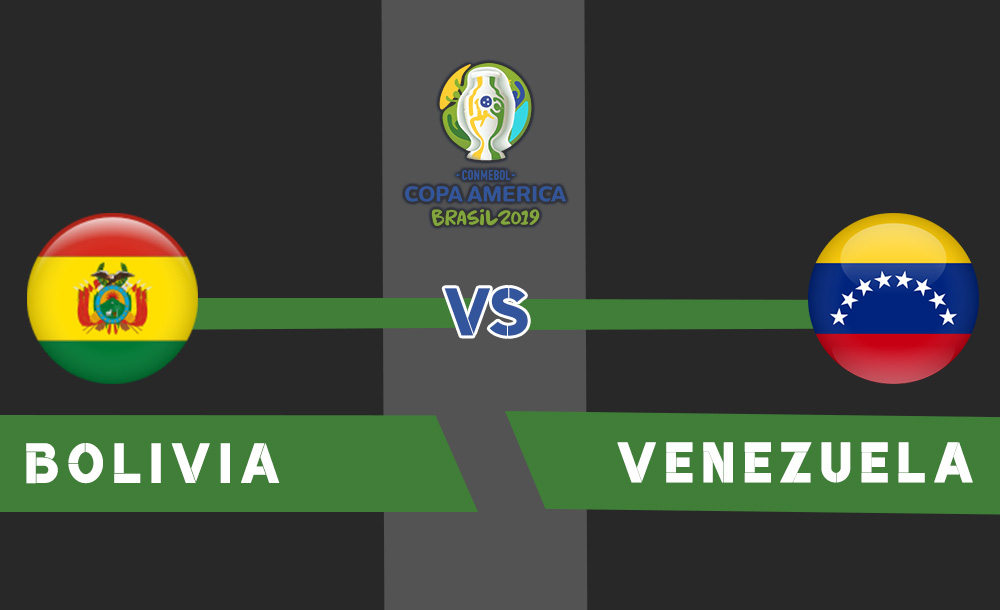 The teams’ in Group A have faced 2 matches each and on the final group stage round, Bolivia will face Venezuela. Bolivia is already at the bottom of the table, having lost the first two matches to Brazil and Peru. Though Venezuela does not seem to be in a good form, they are not in the bad form either.

Venezuela neither scored nor did they let the opponent score in their previous two group stage matches. Both the teams have not claimed a win in the 2019 Copa America yet but for the upcoming match between the two, chances are high for Venezuela to end the match victorious with 66.7%.

Estádio Governador Magalhães Pinto will feature the match between Bolivia and Venezuela, which is the final match of the Copa America’s group stage. Check out the other details regarding the match here.

About the Game: On Saturday 22 June 2019, 8:00 pm, Bolivia will play against Venezuela at the Estádio Governador Magalhães Pinto. Bolivia lost their previous match to Peru, while Venezuela played against Brazil which resulted in a draw.

Where can I Find the Live Match?

The live streaming option can be found in the betting site bet365 through which you can watch the live action of the ongoing Copa America match. Just click the link below to watch the match.

The country along with the TV channels that will be broadcasting the match live have been shared in the table below. Want us to add your country to the table? Let us know in the comments at the end of the page.

Bolivia is currently in the 4th place with 0 points, having lost against Peru 1-3, whereas Venezuela has scored 2 points so far after a 0-0 draw match against Brazil and stands 3rd in the table. The latest standings of the teams’ is tabled below

In accordance with the bet365, the betting odds for the next Copa America match has been shared in this section. As of June 21, 9:00 am, the odds for the match is:

The winning chances of Bolivia are very less when compared to Venezuela. Both the teams will be playing with the aim of advancing to the next stage but the chances are slim for Bolivia to qualify for the next round.

Can Bolivia qualify for quarter-finals? Will Venezuela claim their first win of the season this Saturday? Keep reading to know our prediction.

Will Bolivia Win this Match?

The inaugural match of the 2019 Copa America was between Brazil and Bolivia, which resulted in a goalless defeat for Bolivia, while Brazil was able to score 3 goals in the second half of the match. After facing their first 0-3 defeat of the season, they played against Peru at the Maracana Stadium.

Peru grabbed the chance of hitting the net thrice, whereas Bolivia’s Marcelo Martins Moreno scored the only goal for the team at the 28th-minute which was a penalty shoot-out. They were able to take 2 shots on target but failed to tally the score or win over Peru on matchday 2.

Will this Match also be a Draw?

The 2 times drawn team Venezuela will be facing Bolivia this Saturday. Their previous two matches have resulted in a goalless draw. The season kicked off for the team against Peru during which Luis Del Pino Mago was handed over a red card at the 75th-minute and the match saw 0 goals from both the teams.

Followed by their first draw match, their next match at Copa America was against Brazil, which also saw 0 goals from either team. Both the teams were able to take only one shot on target, which they failed to convert into a goal. Will this match also end up in a draw?

The next and final match of the group stage for Bolivia, as well as, Venezuela will be played at the Mineirao Stadium. Chances are very narrow for Bolivia to qualify for the quarter-finals, yet they will try their best to do so. The other team has faced 2 draw matches at the Copa America so far and will be looking for a win.

The Saturday’s match will favor Venezuela 66.7% as they look confident enough to grab a win. The team was on a 2 game undefeated streak that got extended to 3 after their 0-0 draw match against Brazil. If Venezuela wins the match, there are chances for them to advance to the quarter-finals.

Taking into account the Friendly matches, Copa America matches, and WC Qualifiers South America matches, Bolivia and Venezuela have played against each other for a total of 36 times. Their overall meetings have resulted as follow:

The table below shows the previous meeting of the two teams. Check out when and where Bolivia and Venezuela have met before.