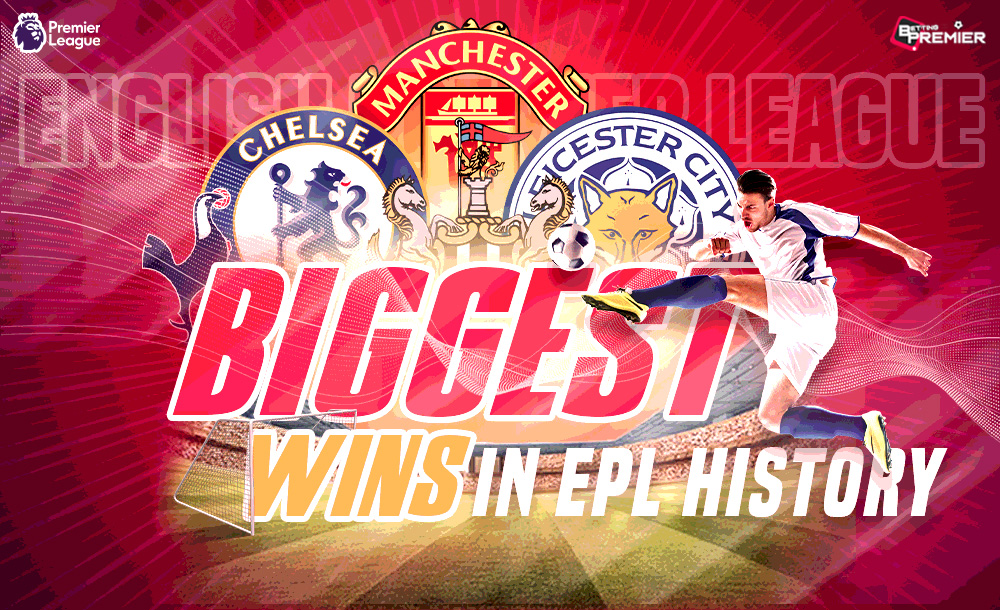 Of all the football leagues around the world, the English Premier League has had immense attraction throughout the globe with its exceptional drama in both, on and off the pitch. It is widely considered the top football league in the world for its storied franchises, their venues, the connection between the teams, their supporters and the fact that its most of its players are world class.

All these factors combine to create the extravagant festival named EPL which in turn creates massive demand in terms of viewership, both domestically and internationally. Forming the blood and bone of such an esteemed football competition, the drama in EPL has always been enough to trigger and maintain a wide range of audience for the league.

But, no matter whatever cost is spent in the advertising of a product, it can only be sold if the actual product accomplishes the task of fulfilling the requirement of the audience. As a matter of fact, the EPL has had many of those memorable moments that have made the whole world focus its eyes on England.

Over the years, the competition has seen some of the contenders defeated in the most gruesome way, marking such losses as a scar for the victim and a pride for the winner. Such results are very rare, but whenever they occur it takes the league to a whole new level and here’s 15 such games which have been regarded as the biggest wins in the English Premier League history. 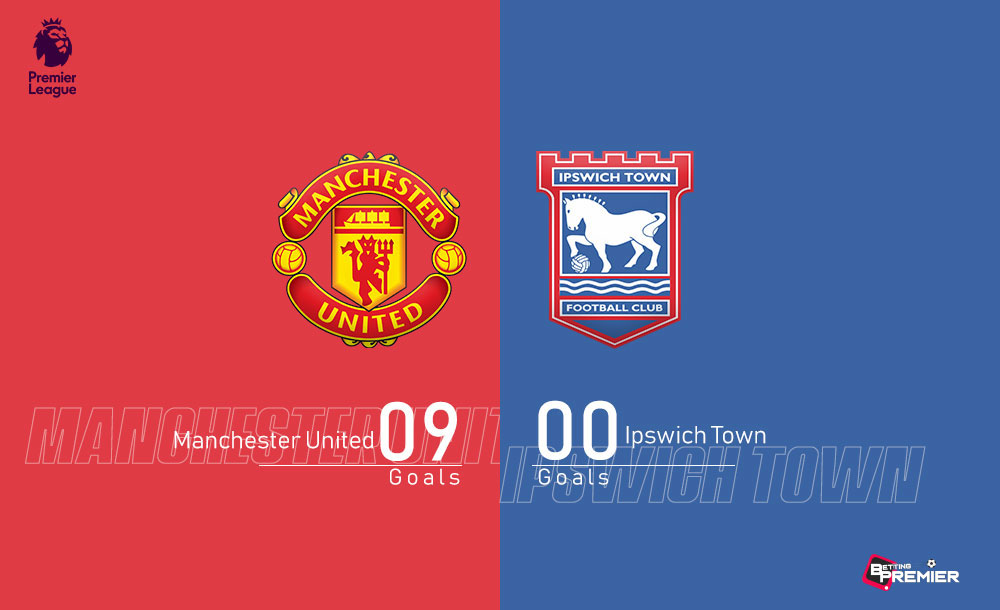 The 1994-95 season match between Manchester United and Ipswich Town at Old Trafford, Manchester, took place on 4th March 1995. The two teams went into the match from opposite ends, although Ipswich had beaten United earlier in the season 3-2 at Portman Road.

Andy Cole scored a Premier League record 5 goals in the game to set up a 9–0 win for Manchester United, another Premier League scoring record. The visitors were stunned by the hosts’ performance and the atmosphere at Old Trafford was purely driven to favor the Red Devils. 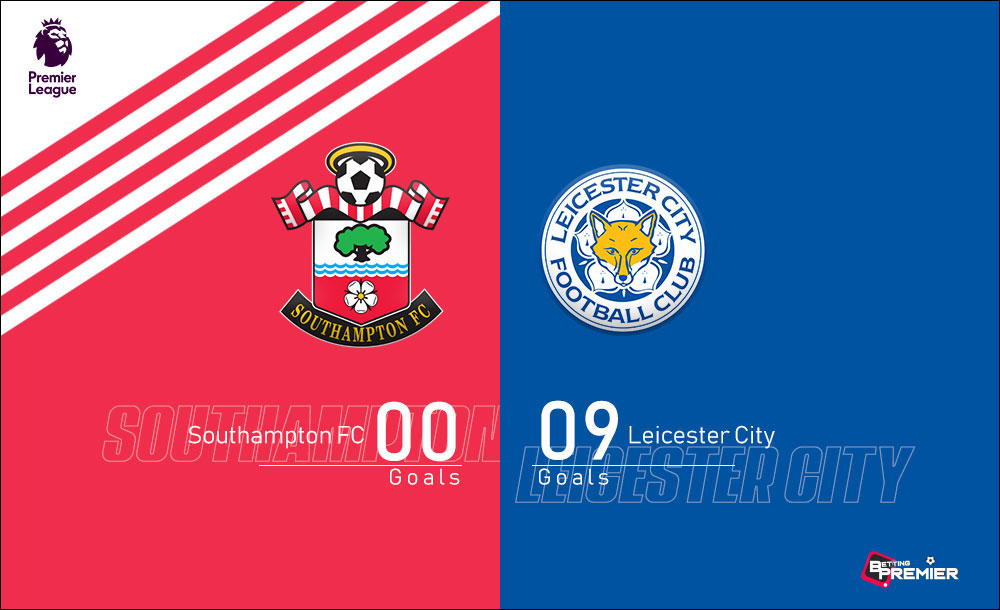 Equalizing the Red Devils’ 24 year old record, Leicester City wrapped Southampton for 0-9 on 26th October 2019. It was a recent record and it was quite unpredictable if the Foxes had really equaled themselves with the earlier record of Manchester United before the end of the game.

In the final minutes of stoppage time, Jamie Vardy’s penalty ensured that the record was shared. Both Vardy and Ayoze Perez scored hat tricks and the Foxes recorded the biggest ever victory by an away side in an English top-flight league match in the 131-year history of the Football League. 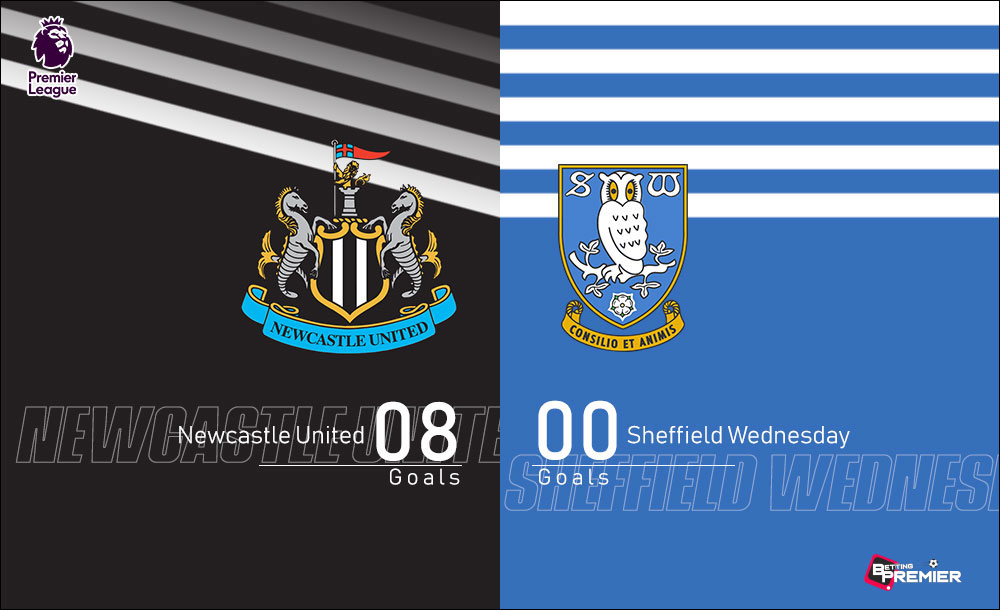 Next up on the biggest wins in EPL list is Newcastle United 8-0 win against Sheffield Wednesday. Twenty years ago Newcastle, beaten 2-1 by Sunderland on their previous home outing, took on Sheffield Wednesday at St James’s Park looking for that win. And the 90 minutes that followed changed everything. United won 8-0 thanks to 5 goals from Alan Shearer and strikes from Aaron Hughes, Kieron Dyer and Gary Speed. Only Manchester United have won a Premier League game by a bigger margin.

Harper was in that goal that day, having recovered from injury in time to play in the European tie in Sofia. Newcastle went on to finish 11th that season, and after a challenging first full season at the club, Sir Bobby guided the team to 3rd, 4th and 5th placed finishes. 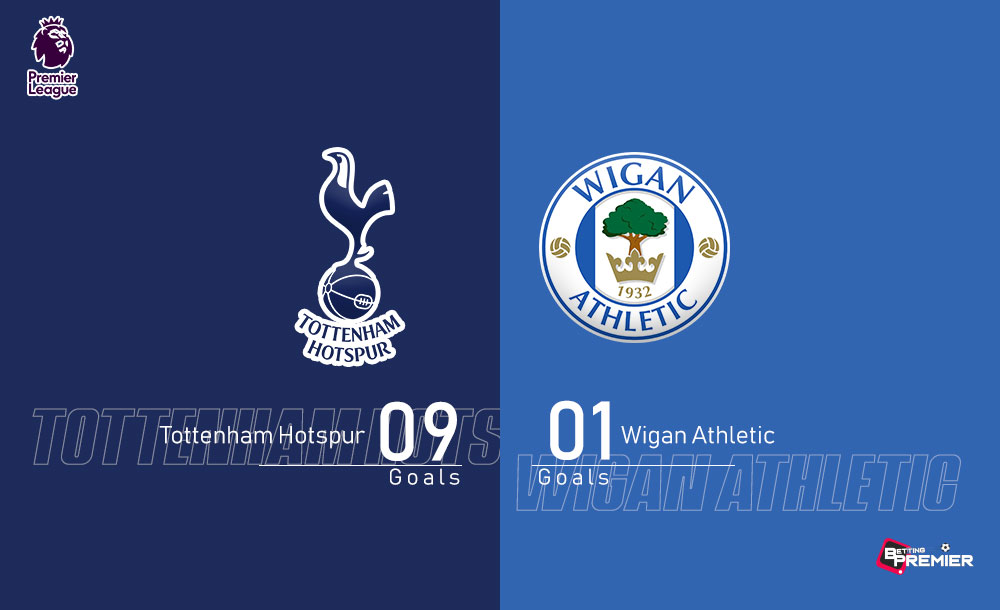 It is the first time a team has scored 9 goals in a Premier League fixture since Manchester United thrashed Ipswich 9-0 at Old Trafford in 1995. Defoe became only the 3rd player to score 5 in one Premier League match after Alan Shearer and Andy Cole, and his exploits cannot have harmed his England prospects.

The first 3 of Defoe’s goals came in a 7-minute burst shortly after the break – the second fastest hat-trick in the history of the Premier League. Tottenham’s pressure eventually subdued when a brilliant low cross whipped in from a deep position by Lennon was stabbed home by Defoe after 51 minutes and from that moment, Wigan crumbled.

On 9th May, 2010, Chelsea recaptured the Premier League title in an emphatic fashion as Wigan Athletic were thrashed for 8-0 at Stamford Bridge. When Carlo Ancelotti’s side needed victory to end Manchester United’s three-season reign as champions and once Nicolas Anelka gave them the lead after only 6 minutes there was never any doubt they would reclaim the crown.

The thumping win was the biggest in their 105-year history and also saw them break the record for the most league goals in a Premier League season with 103. The previous best was 97, which Manchester United scored in the 1999/2000 season. 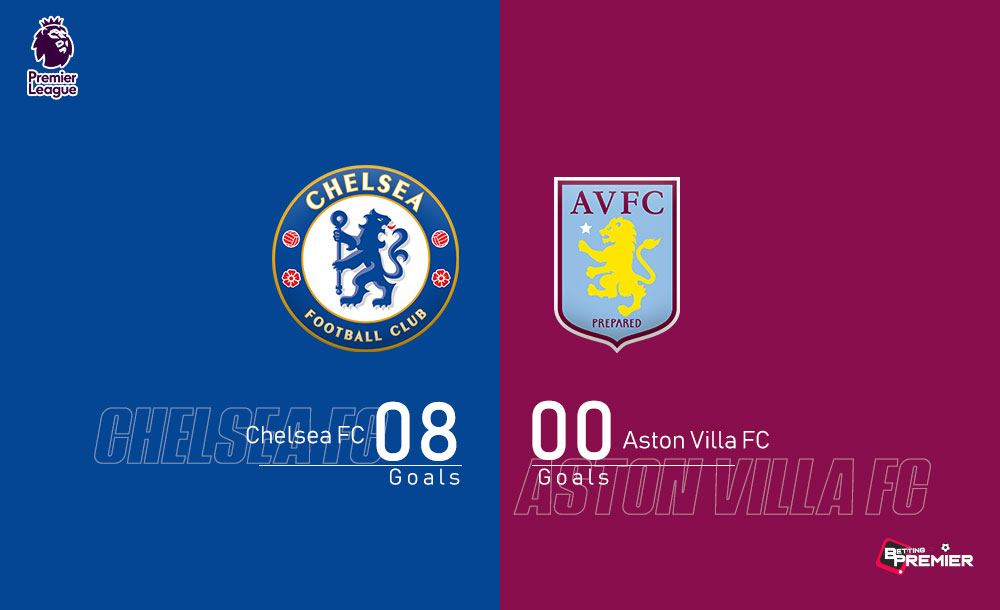 The result marked the first time 7 players from one team have scored in a match and marked Chelsea’s record 8-0 win over Wigan from May 2010. A majestic performance from Lampard and his midfield partner Luiz, laid the platform for a dominant display that could have easily seen them reach double figures.

Frank Lampard marked his 500th Premier League start by crashing home a 4th on the hour and two strikes from substitute Ramires, an Oscar penalty and a fine individual effort from Eden Hazard rounded off the scoring. 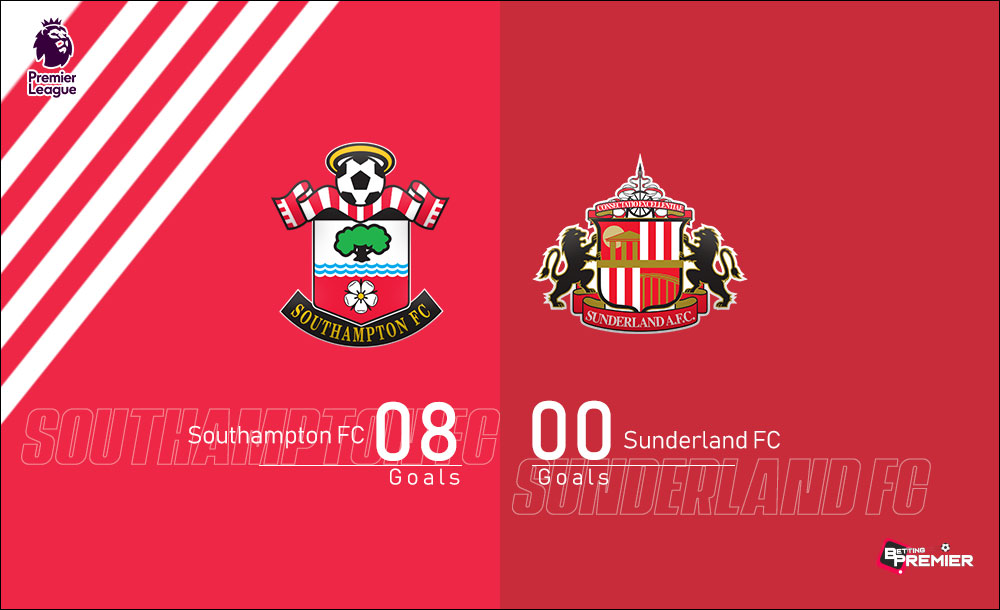 Ronald Koeman’s Southampton side ran riot to dispatch a woeful Sunderland 8-0 and to cement their place in the 3rd spot in the Premier League. Even after Santiago Vergini’s spectacular own goal in the 12th minute, it was all downhill for Gus Poyet’s men.

In-form Saints forward Graziano Pelle scored either side of half time, while one each from Jack Cork, Dusan Tadic, Victor Wanyama and Sadio Mane compounded the misery after Liam Bridcutt had to put into his own net. The visitors were out of the contest by the break, allowing the Saints to put on a real show and delight their fans. 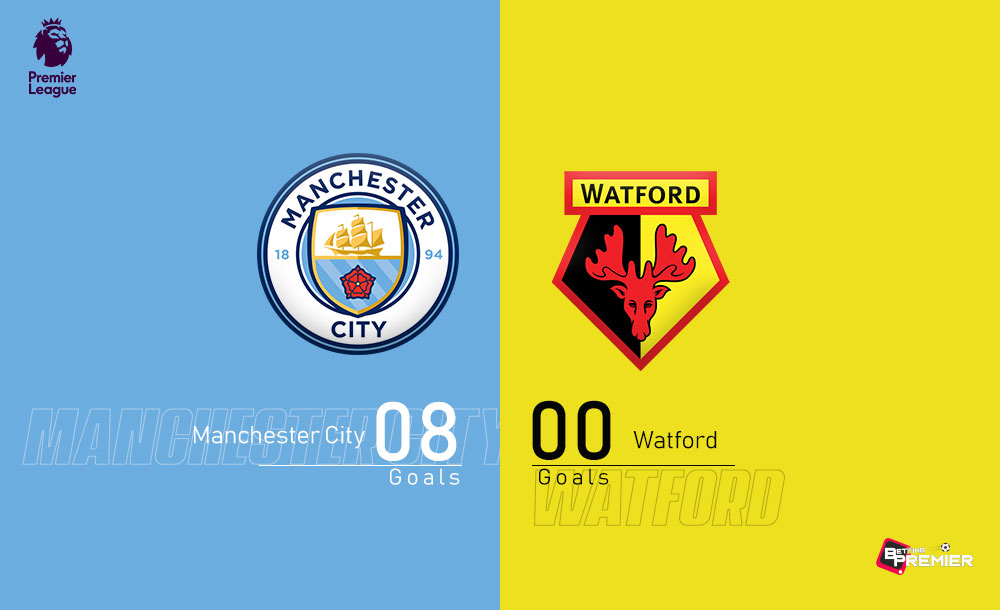 Bernardo Silva netted a hat-trick in the club’s biggest Premier League win as Pep Guardiola’s men destroyed the Hornets in Etihad rout. Manchester City embarrassed Watford after beating the Hornets 8-0 at the Etihad. David Silva put the reigning champions ahead inside one minute before Sergio Aguero doubled the lead. Riyad Mahrez got his name on the scoresheet four minutes later after his free-kick took a wicked deflection.

Bernardo Silva and Nicolas Otamendi then incredibly made it 5-0 in 18 minutes as Pep Guardiola’s side became the fastest team to go 5-0 up in Premier League history during the first half. Bernardo Silva then got a second-half brace by the hour mark to complete his hat-trick to make it 7-0 for City. Kevin De Bruyne then completed the rout with the pick of the goals with an eighth goal for the hosts. 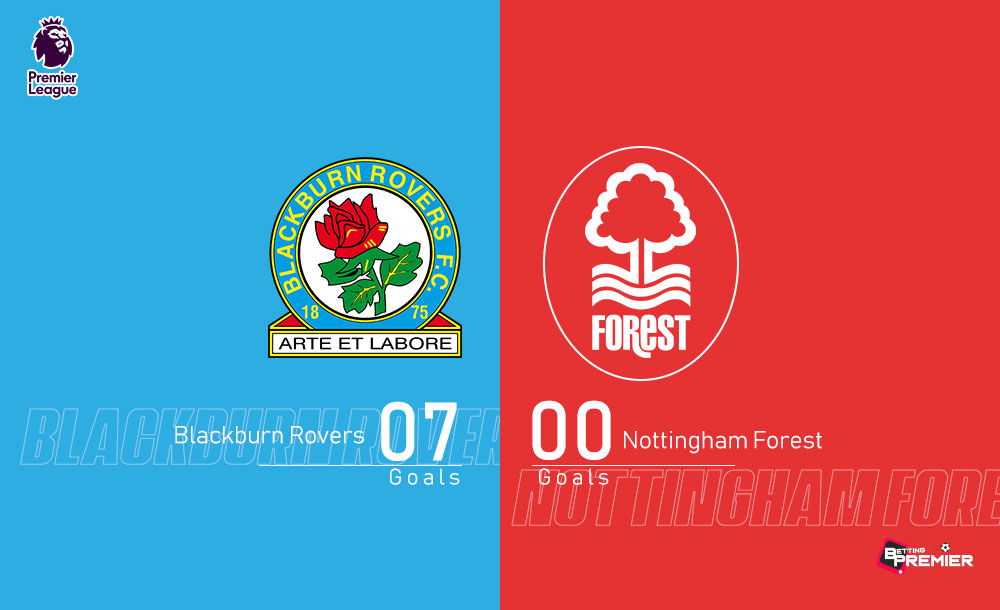 Unbeaten in a record 25 successive Premiership games, Forest were completely and utterly destroyed by Rovers with a display that will rank as special on a very special day in Ewood history. The red carpet was out for Jack Walker to open the new Ewood but the only thing which was red at the end were Forest shirts and faces.

On November 18, 1995, the Rovers punished the visitors with back to back goals, by building up momentum throughout the game. With some quality defending, they bettered their record of goals by registering a clean sheet victory. 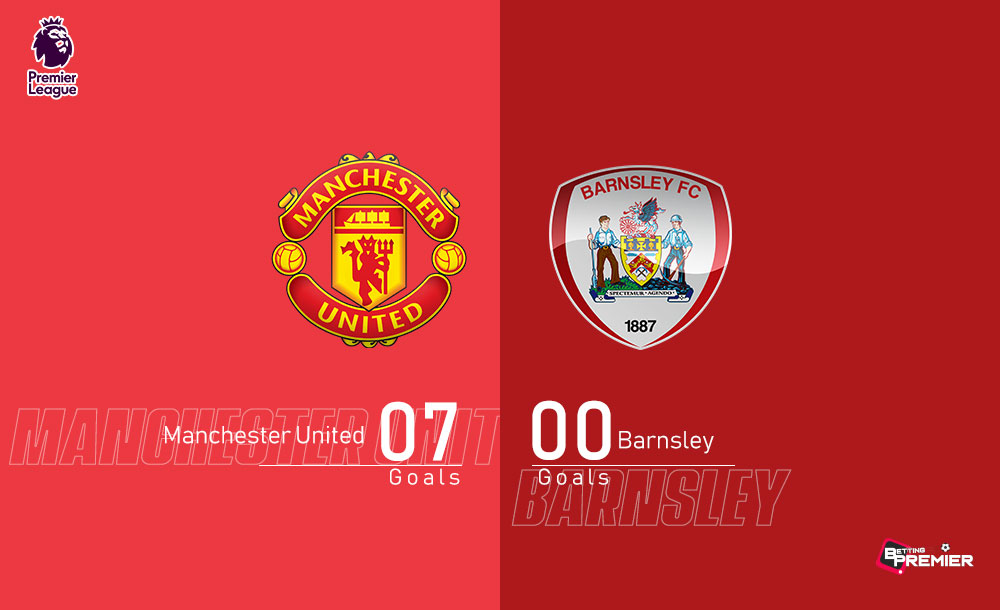 On 25 October 1997, Manchester United hosted one of their defining matches in the club’s career against Barnsley. With Andy Cole leading the attack from the front, after back to back goals, the Red Devils went insane at the Old Trafford.

The game was intense, but the hosts managed to fire up whenever they got their chance and spent the rest of the game time by creating many. Right after the game, there was a happy Manchester United side and the fans were completely amazed at the kind of football they witnessed that day. 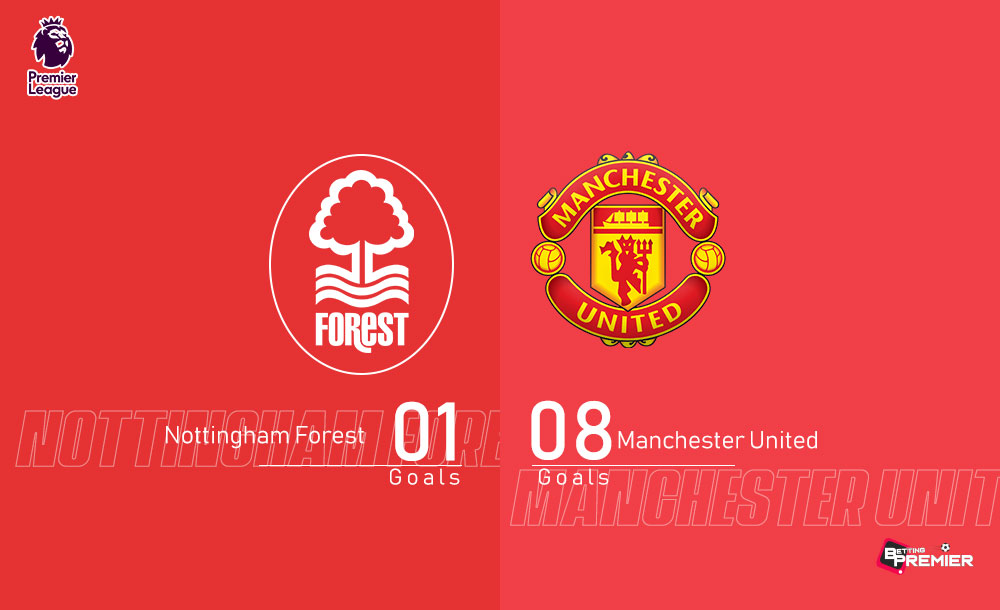 The 1998–99 season match between Nottingham Forest and Manchester United at the City Ground took place on 6 February 1999. It was a great display by the guests as Manchester United won the match 8–1, thereby recording the largest away win in the history of the Premier League until Leicester City’s 9–0 victory at Southampton 20 years later. 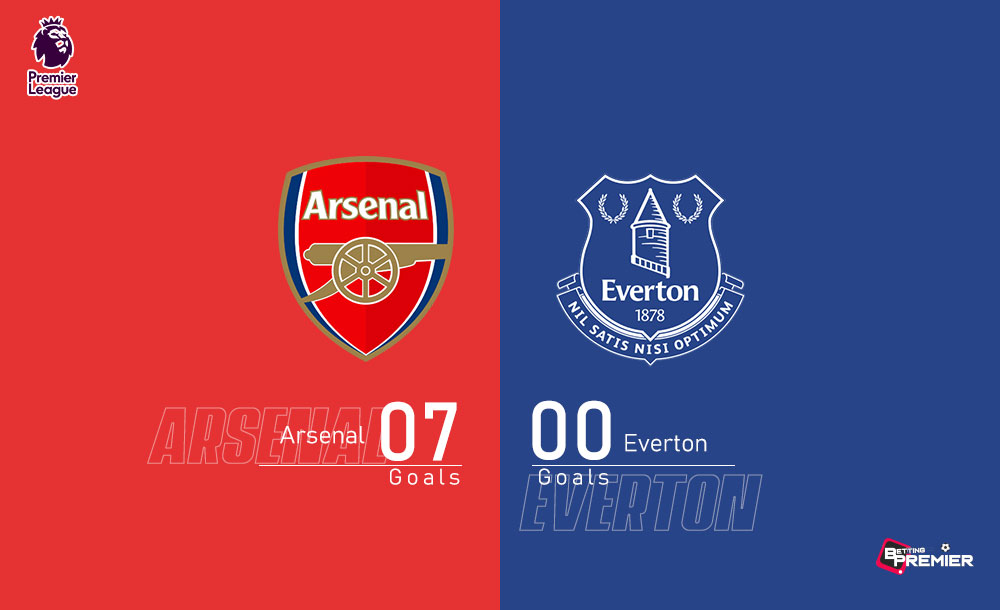 One of the biggest margins of victory in the Premier League to-date, as Arsenal decimated a side containing the present Manchester City assistant manager Mikel Arteta 7-0 on the 11th of May 2005. A day when the mercurial Denis Bergkamp rolled back the years to perform, Arsenal started the goal rush with an 8th minute goal from Dutch striker Robin Van Persie before doubling it with a 12th minute goal from Robert Pires both of them coming from an assist made by the “Non-flying Dutchman”.

A 77th-minute goal by Bergkamp capped off a wonderful evening for the then 35-year old Dutch magician before Flamini ended the goal-scoring spree in the 85th minute slotting home a volley to make it 7-0. 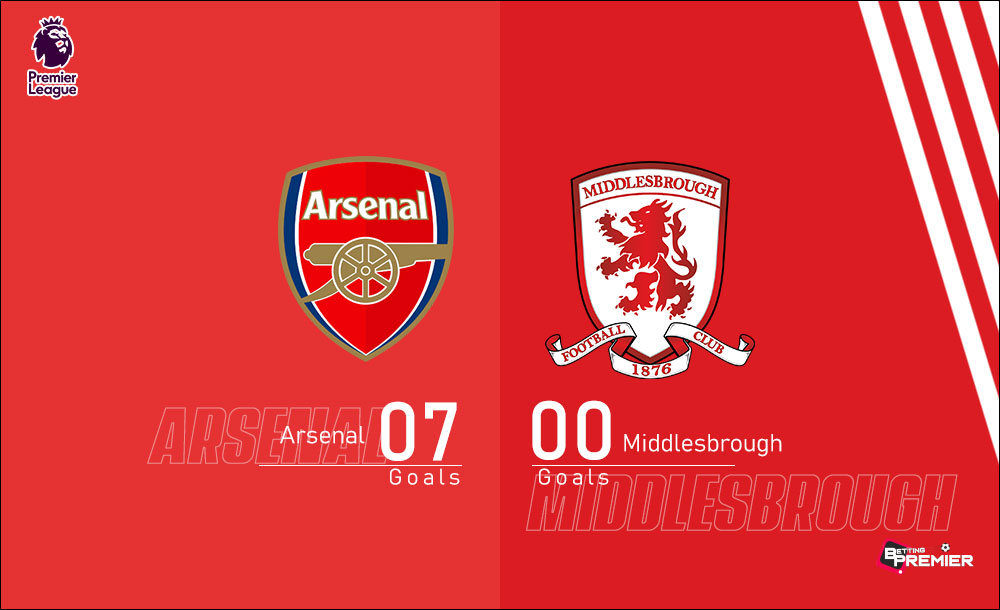 Thierry Henry’s brilliant hat-trick saw him equal Cliff Bastin’s record of 150 league goals for Arsenal as the Gunners put 10-man Middlesbrough to the sword on January 14, 2006. Henry opened the scoring with a superb volley, then Phillippe Senderos powered in a towering header before Henry broke clear to slot home his second.

As if Arsenal fans did not have enough to cheer, they were further buoyed as England defender Ashley Cole came on as a 35th-minute substitute. Henry was in on the act again on the half hour, sprinting clear of the Boro defence to reach Reyes’ pass, then coolly sidefooted home past the on-rushing Jones. 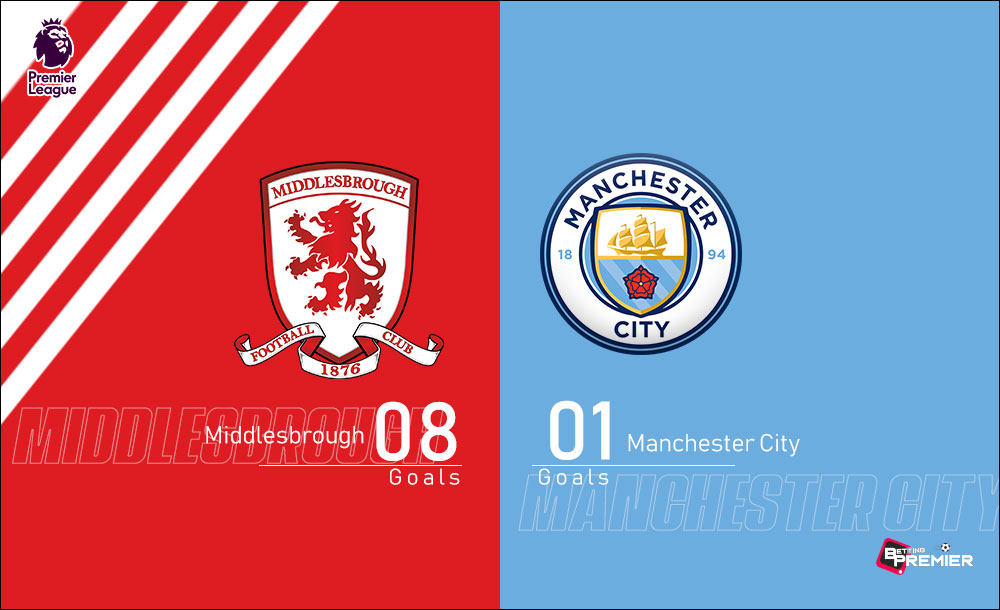 On May 11, 2008, Afonso Alves drilled the perfect start to an away game, then Downing hooked into the net and Alves ran clear to make it 4-0 before Adam Johnson scored with a deflected effort. Fabio Rochemback’s fierce free-kick was followed by Jeremie Aliadiere’s low shot and, although Elano replied, Alves completed his hat-trick to make it 8-1.

City were torn apart by Boro who, without some excellent saves from visiting keeper Andreas Isaksson, would have reached double figures at a canter. A fortuitous place in Europe aside, their season has limped to a disappointing conclusion – this defeat was their third in a row, but Boro deserve credit too for the way they went for the kill. 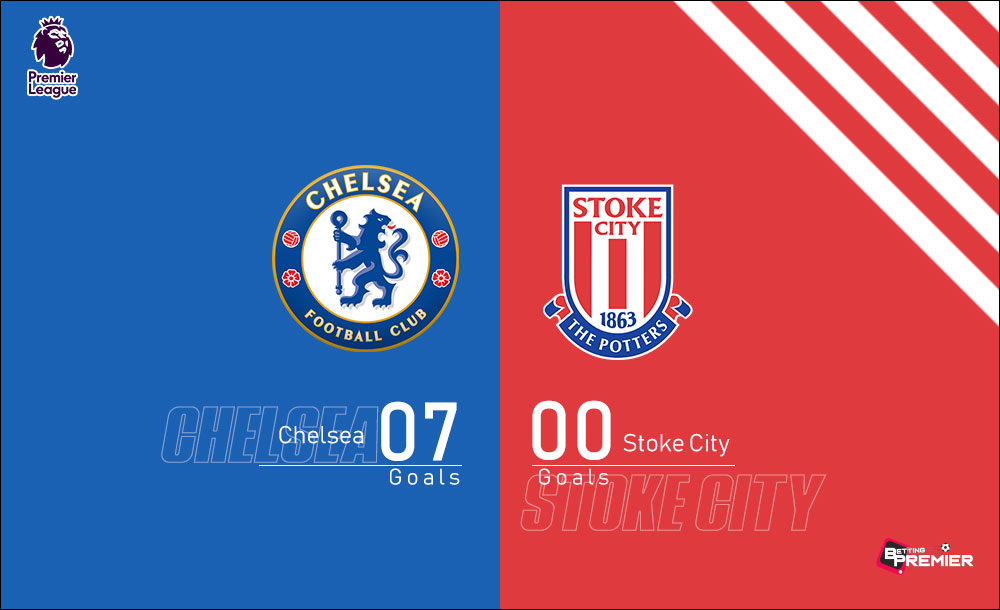 It was one of those best moments for the men in blue to cherish in the Premier League arena, as they made it 7-0 against Stoke City on the 25th of April 2010. It all started when Kalou headed home Didier Drogba’s cross before Stoke keeper – Thomas Sorensen sustained a dislocated elbow as Kalou slid in to score his second goal.

Very soon after that, Lampard made it 3-0 from the spot after Robert Huth fouled Kalou, who then ran clear to complete his hat-trick. Lampard hooked home a 5th and Daniel Sturridge’s cool finish and a Florent Malouda tap-in completed the rout.