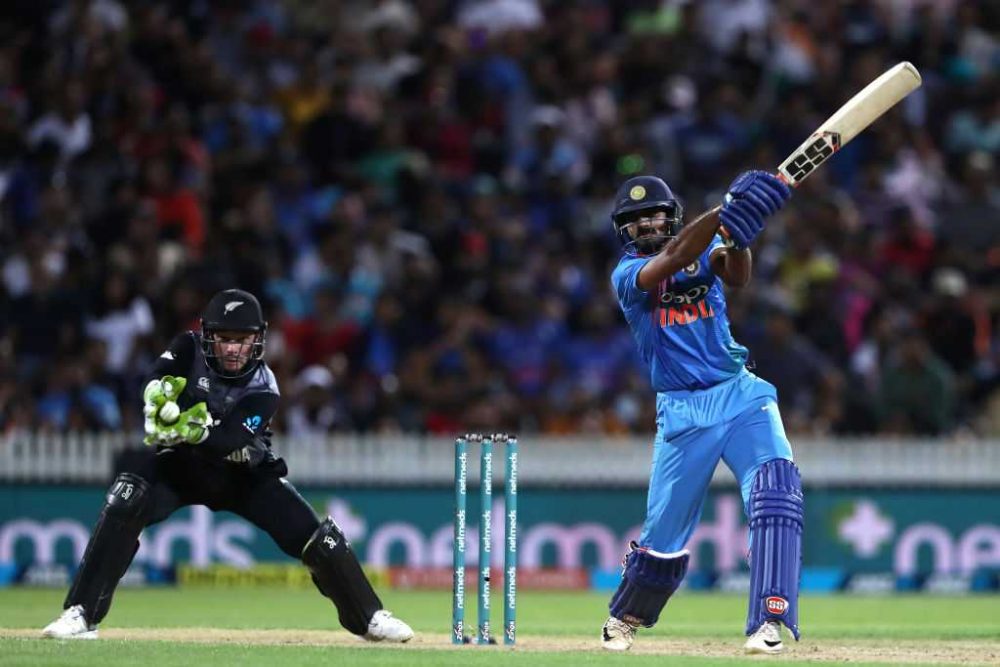 Here comes the big match of the tournament! The previous two ODI matches – Sri Lanka vs India, and South Africa vs Australia confirmed the knockout matches that will commence this Tuesday. Of the 4 best teams that have made to the 2019 ICC World Cup Semi-finals, the first semis will be between India and New Zealand.

India has made it to the top of the table, having grabbed a solid 15 points at the end of the group stage, while New Zealand stands 4th with the same score as Pakistan – 11 points but was lucky enough to qualify for the semis on the basis of NRR (Net Run-Rate).

This is one of the most awaited matches of the tournament since their previous meeting was canceled due to rain. To see them play directly at the semi-finals is more intriguing. India will be entering the stadium with full confidence hoping to advance to the finals and has 76.9% winning chances.

The first semi-final match of the 2019 ICC World Cup is nearing. India will play against New Zealand for the first time this season and all the necessary details regarding – What Time is the Match? When is India vs New Zealand Match? Where will India take on New Zealand? has been shared below.

About the Game: On Tuesday 9 July, 10:30 am, India will battle against New Zealand at the Old Trafford Cricket Ground. India won their previous match against Sri Lanka, which they won by 7 wickets and 39 balls left. On the other hand, New Zealand played their previous match against England, which resulted in a loss with England, having won by 119 runs.

How to Watch the First ICC WC Semi-finals?

The match will also be shown on certain TV Channels, which we have listed below. The TV coverage as per the location has been mentioned. Check your location and the respective channel to enjoy the live-action of the match.

As of 8 July, 07:00 am, the betting odds for the first semi-final match of the Cricket World Cup via bet365 that shows the straight favorites and underdogs of the match. The site is one among the most popular betting sites and the odds of the teams are as follow:

This is the outright winning odds. The odds for the teams to kick off the match by winning the toss is fixed as:

New Zealand had a good start to the season as they claimed 3 consecutive wins until a draw match, while India was in its best form until their only loss of the season against England. The winning chances of both the teams are mentioned below. Check it out and place your bets here.

How many matches did New Zealand Win? Did India lose just one match at the World Cup this season? The teams’ standings, league statistics, and other details have been shared below. Have a look at it. 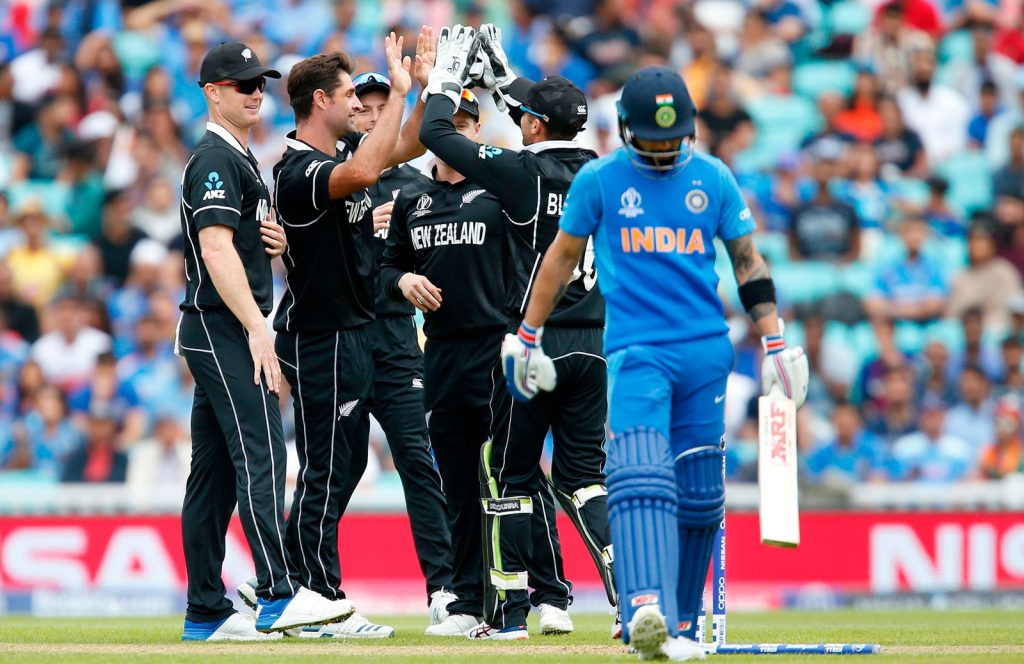 The only game that was not played by both the teams at the campaign was against each other on June 13, which was abandoned without a ball bowled. The match was called off due to heavy rain and New Zealand remained unbeaten along with India. The umpires made a frequent inspection and eventually declared a 1 point each decision.

The two teams met at the Oval stadium in a warm-up game before the actual World Cup 2019, which was won by New Zealand by 6 wickets with 77 balls left. India lost its first warm-up match but sealed a win against Bangladesh by 95 runs, while New Zealand lost to West Indies in the second warm-up match.

As of 8 July, the so-far scored runs and the star performers of the two teams have been shared below.

Rohit Sharma of India stands first in the list of most runs scored this campaign so far, who also went on to make a record-breaking history of 5 centuries in this season of the World Cup that include 3 in a row. Bumrah stands 4th in the list of Most wickets this campaign with 17 wickets taken so far in 8 matches.

The player who stands 6th in the list of most runs scored this season is the New Zealand’s Kane Williamson who has hit a staggering 481 runs with just 19 runs behind the 5th placed England player JE Root. Ferguson stands 3rd with the same number of wickets taken as Bumrah in just 7 matches.

Which team will make to the finals? Is it going to be a repeated win for India or first New Zealand win? Go through Bettingpremier’s prediction for the match.

Will India Win the Toss and the Match?

India has some of the fine bowlers who could take the team to the finals even with a low score. Jasprit Bumrah has secured a place in the first 5 bowlers with the most wickets this season and he is one among the bowlers, the New Zealand team should be mindful of.

India would have played against England (the only team to which they lost in the current campaign) if they hadn’t won against Sri Lanka and grabbed the 2 winning points. India won over Sri Lanka by 7 wickets with 39 balls left, which got them atop the table.

They have been playing well so far even without their key player Shikhar Dhawan, who received the Player of the Match against Australia on 9 June, after which he failed to continue playing with the team because of a left thumb fracture in the win against Australia.

Can New Zealand Qualify for the Finals?

The team looks happy with their first semi-final match against India, which could have been with Australia if Australia had won the match against South Africa. New Zealand has already claimed a win over India at the warm-up match and will follow the same strategy to qualify for the finals.

New Zealand’s Lockie Ferguson is expected to be back for the first semi-final match of the World Cup against India. He is the 3rd most wickets taken player of the campaign with 17 wickets to his name in just 7 matches. The team looks more dependable on the batsman Kane Williamson when it comes to setting a target.

They were on a 6 game undefeated streak until their 3 disappointing back-to-back defeats. New Zealand played against England before qualifying for the semis, which was the NZ’s biggest loss of the season as England won by 119 runs. They lost all the 10 wickets at the 45th over with just 186 runs.

Men in Blue or the Black Caps? – Our prediction 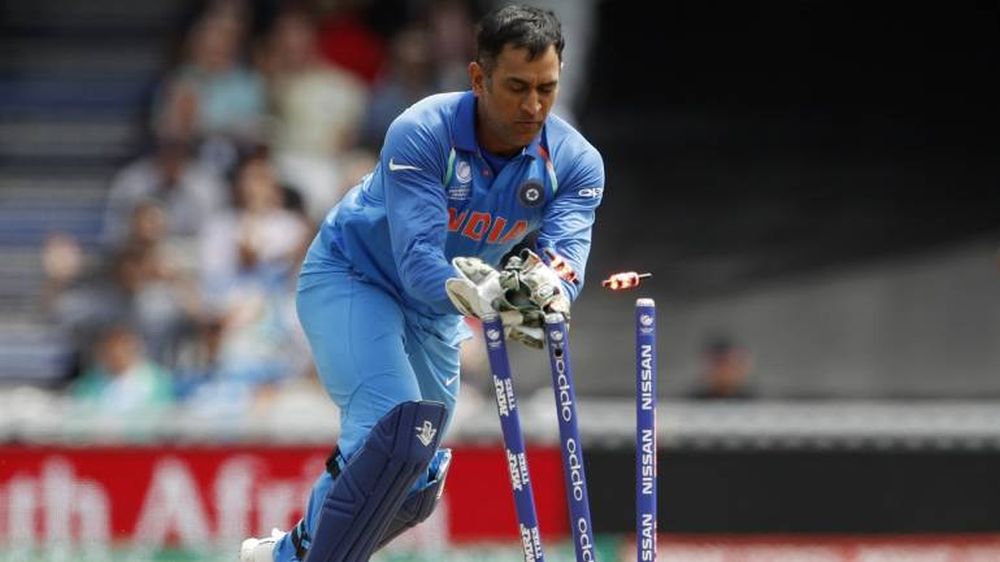 MS Dhoni is expected to take the team to the finals with his amazing wicket-keeping.

The Men in blue, as well as, the Black Cap team has performed exceptionally well this campaign. New Zealand was able to grab early wins in the season with some of the easy matches, while India went on to win 7 of the 9 matches, having lost just 1 match to England.

If New Zealand wins the toss and chooses to bowl first, then the chances for them to reach the finals is high, as the Indian team looks strong as bowlers. Other than Kane Williamson, Ross Taylor has scored 261 runs so far who might be a great factor to the team’s score on Tuesday.

World Cup is where the best players make their mark and Rohit Sharma who recently received 2 consecutive ‘Player of the Match’ award is the player to watch on 9 July. For New Zealand to win, they need a lot of contributing factors like player’s performance, winning the toss, and early Indian player’s wicket.

India and New Zealand have played against each other for a total of 106 times at the ODI so far. Their meetings at World cup has been recorded 8 times. The results of the ODI and the World Cup have been shared separately below. Check it out.

The Men in Blue won their first trophy in 1983 under the captaincy of Kapil Dev. Since then India has managed to reach the finals thrice. New Zealand has reached the finals just once but was not able to seal a win. Check out the table to know the years in which the teams qualified for the finals.

The table below shows the previous meeting of the two teams. Check out the previous five meetings along with when and where India played against New Zealand.