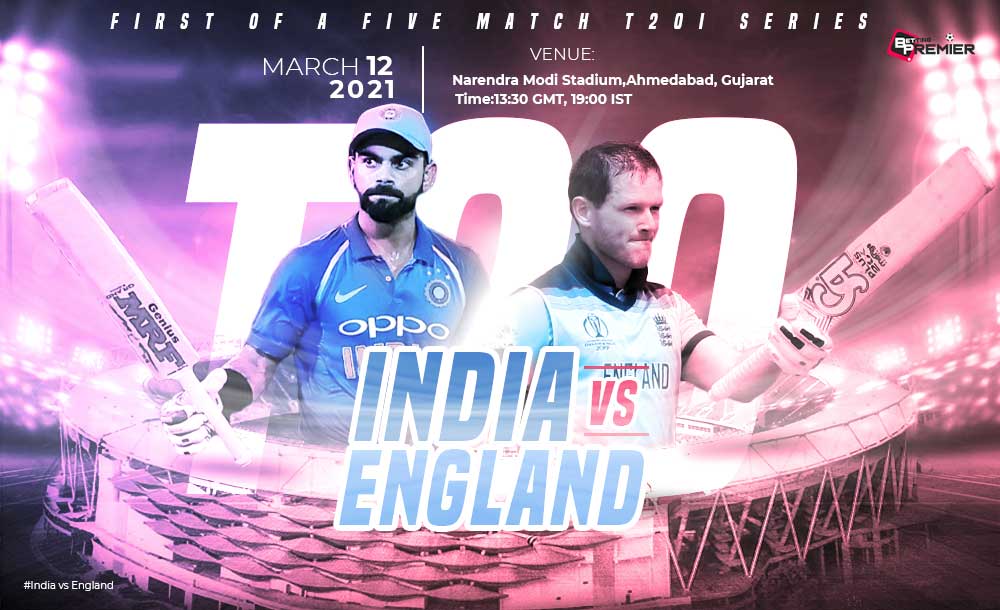 The pioneers of cricket faced defeat in the recent test series against India, the winners have climbed up in the test rankings and dominate the ICC World Test Championship points table. However, England is still the leaders in T20I and ODI rankings. India is trailing the Britons in both. The hosts of the upcoming T20I World Cup, India, eye to break the status quo in this month T20I series with England.

A hectic schedule consisting of five-matches awaits the two sides, the T20I series starts on Friday and ends on 20 March. All the games will be played in the Motera Stadium in Ahmedabad, given the pandemic restrictions.

There is some bad blood between England and India, on and off the pitch. English veterans and players alike criticized the Ahmedabad pitch, for which Rohit Sharma pointed out that the foreigners never care about them while the Indians are on a tour. Virat Kohli got verbal with Ben Stokes, in the fourth test match, owing to the latter’s remarks about Mohammed Siraj.

Details of the India vs England 1st T20I game

How to watch India vs England game?

As always, the Star Sports network is the official broadcaster of the India vs England T20I series.

Disney+ Hotstar is the go-to destination for live streaming the enthralling affair between India and England.

BCCI have a hard time selecting T20 talents these days, IPL stacks a plethora of fresh faces each year with incredible stories and skills. Natarajan is a fine example of the system, the pace bowler recorded his debut in all three formats lately. However, shoulder issues haunt the yorker specialist Natarajan who is rolling back years and the young spinner Varun Chakravarthy failed the fitness test again. Chakravarthy has ruled off the Australian series for the same reason. Rahul Tewatia is sidelined owing to fitness while leg-spinner Rahul Chahar is expected to see the field. A wicket-taker and one of the best bowlers in the world right now, Jasprit Bumrah is rested on account of the packed schedule. In England, Jofra Archer is cleared fit for the series, the England fast bowler is familiar with Indian pitches through his IPL experience.

Playing at home, India has never been defeated in a T20 Series since 2019. Batting is the strength of the eleven, who will be playing on Friday. KL Rahul and Rohit Sharma are a formidable duo, the former has shown impeccable patience and leadership qualities in the IPL. Aggressive athlete Virat Kohli has a batting average of above 50 runs in all three formats while his fielding prowess adds to it. Bhuvaneshwar Kumar will swing the ball, Axar Patel and Chahal will make use of turn if they could find any in the pitch. Destruction specialist Hardik Pandya will be given the duty of garnering quick runs at the end.

Jos Buttler and Ben Stokes might start the play for England. Dawid Malan will enter as the No. 3. Jofra Archer and Adil Rashid are expected to shine with the ball. The bridge between the top and bottom is filled by the likes of Jonny Bairstow, Eoin Morgan and Sam Curran. England will eye to bounce back from an awful test performance but India is the home favourite to emerge a victor.