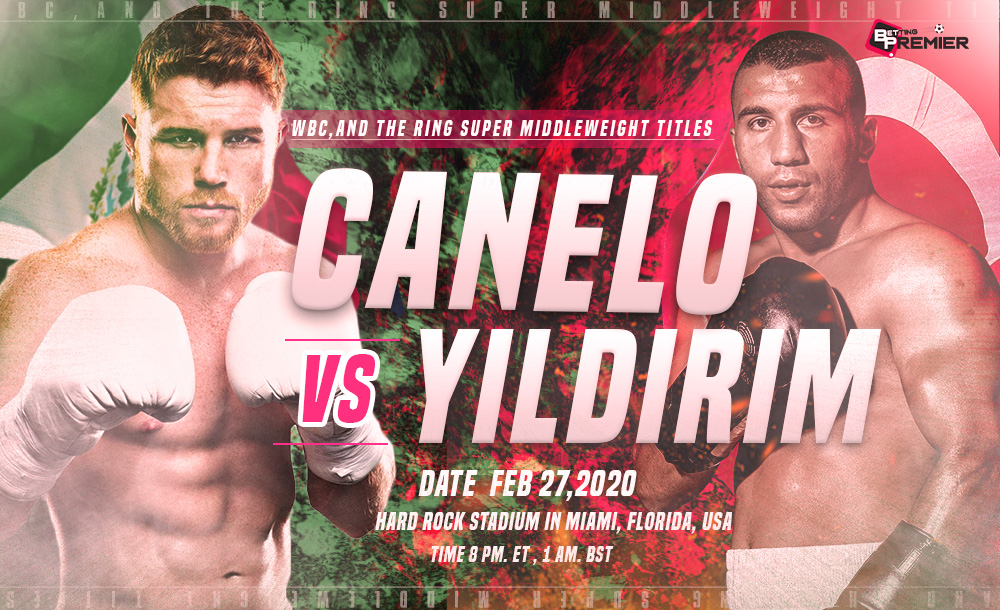 Witness Canelo Alvarez, Witness the greatness. This could be the headline of the upcoming bout that is scheduled to take place on Feb 27. at Hard Rock Stadium in Miami. The Mexican megastar will be defending his WBA, WBC and The Ring super-middleweight titles against the Turkish contender Alvin Yildirim.  Alvarez has already declared himself to be superior than his opponent in a recent interview but to underestimate any opponent, specially who has a height advantage would be a faux pas. Yildirim is 21 and 2 and has a great stamina to be honest. The 29-year-old is an underdog out there who can pull off a shocker.

The flyweight bout between Julio Cesar Martinez and McWilliams Arroyo is the co-main event just scheduled before the main event. Zhilei Zhang, Jerry Forest, Diego Pacheo and Rodolfo Gomez Jr. are some of the boxers who will be involved on the fight card the given day.

When is the Saul Alvarez vs Avni Yildirim?

How to watch the Saul Alvarez vs Avni Yildirim?

DAZN is the one stop destination for Canelo Alvarez vs Avni Yildirim bout, the US, UK & Canadian audience can stream the event on DAZN application in subscription basis.

High on the hog Saul Canelo Alvarez, 54 wins, 1 loss and 2 draws will be defending his WBC and WBA super-middleweight 168-pound titles against Avni Yildirim, 21 and 2 at the Hard Rock Stadium in Miami Gardens, Florida on Saturday, Feb. 27. It has to be one of the most overlooked fights involving a boxing megastar that we have recently seen. Canelo has been giving us some real fight by fight gold in terms of performance and quality of opponent, yet some are taking issue with him scheduling a mandatory versus Avni Yildirim. Only three months after dominating then-undefeated WBA champ or former WBA champ Callum Smith and this came after us not knowing when we would see Canelo in the ring again given its promotional dispute with the golden boy and the zone platform. So, the idea that we are possibly getting three Canelo fights in 2021 after he delivered one of his best career performances in December, this should feel like a gift to boxing fans.

But Canelo’s opponent here, as mentioned is the WBC mandatory challenger. Although Turkey’s Yildirim is not a current top 10 168-pound fighters according to ring magazine who is probably the most credible authority on the rankings, he is, however, a very game and tough fighter. He overachieved in his close technical decision loss versus Anthony Dirrell which was stopped due to head butts. Yildirim celebrated thinking that he won just to find out moments later that they were instead going to the scorecards much to his dismay. Yildirim gave Anthony Dirrell a very close fight.

But don’t get it twisted, Canelo Alvarez is not Anthony Dirrell especially a 36-year-old Anthony Dirrell. Now Yildirim might have just a little success going to Canelo’s body more success in trying to keep Canelo pinned against the ropes. The only way he backs Canelo into the ropes is if Canelo lets him and even then, it’s more likely that the result will look kind of like Canelo’s knockout win over James Kirkland. This one feels like a mismatch and any reservations that one would have had about Canelo’s ability to handle a proper 168-pound fighter was pretty much addressed in his last fight with Callum Smith.

Somehow the defending champion’s speed, technique and power have translated and carried up in weight from 154 to 160 and now in 168, looking as strong as ever. The best-case scenario for Yildirim is if he could somehow withstand Canelo’s firepower after getting hit cleanly repeatedly that maybe he could come on strong down the final stretch and look decent and kind of competitive in the final couple rounds of the fight. If Yildirim goes into survival mode then he might be able to go the distance. However, it’s more likely that Canelo’s fast but surgical power punching will be landing effectively enough and often enough for either the referee or Yildirim’s corner to stop the fight. This is if Yildirim is too brave for his good and doesn’t go down at some point.

Another possibility that Yildirim could hope for is Canelo suffers injury or under trained, but given Canelo’s track record, this is unlikely. It’s an easy pick for all the boxing fans as Canelo is a clear favourite here with a win over Technical Knockout.

Tickled pink Mexican WBC flyweight titleholder, Julio Cesar Martinez lock horns with mandatory challenger McWilliams Arroyo at the Hard Rock Stadium in Miami Gardens, Florida on Saturday, Feb. 27. First and foremost, boxing fans around the globe like El Rey. He is known to be one of the breakout stars in Mexican Boxing over the last 18-24 months. He looked excellent against Cristofer Rosales, destroyed Jay Harris, and recently beat Moises Calleros in a compelling fight. Fans are high on Julio Cesar Martinez. The guy has a high ceiling, is very exciting, and most importantly he is not anywhere near his best yet.

But his opponent McWilliams Arroyo is a real sort of hard-nosed top 10 contenders. McWilliams is a brutal fighter. At flyweight, he can punch and also is an aggressive fighter with decent skills. The 35-year-old always puts in a good account of himself. He lost to Kazuto Ioka back then in 2018 but again didn’t get stopped and won all three bouts with Carlos Maldonado, Carlos Buitrago and Juan Gabriel Medina, all of them in 2019. The Puerto Rican is a solid contender with experience and can punch hard.

It is a solid title defence for Julio Cesar Martinez. Stylistically this fight should be entertaining. El Rey sometimes is a little overzealous and makes defensive mistakes. But, going into this fight, the firm favourite is Julio Cesar Martinez although, McWilliams can pull off a shocker.