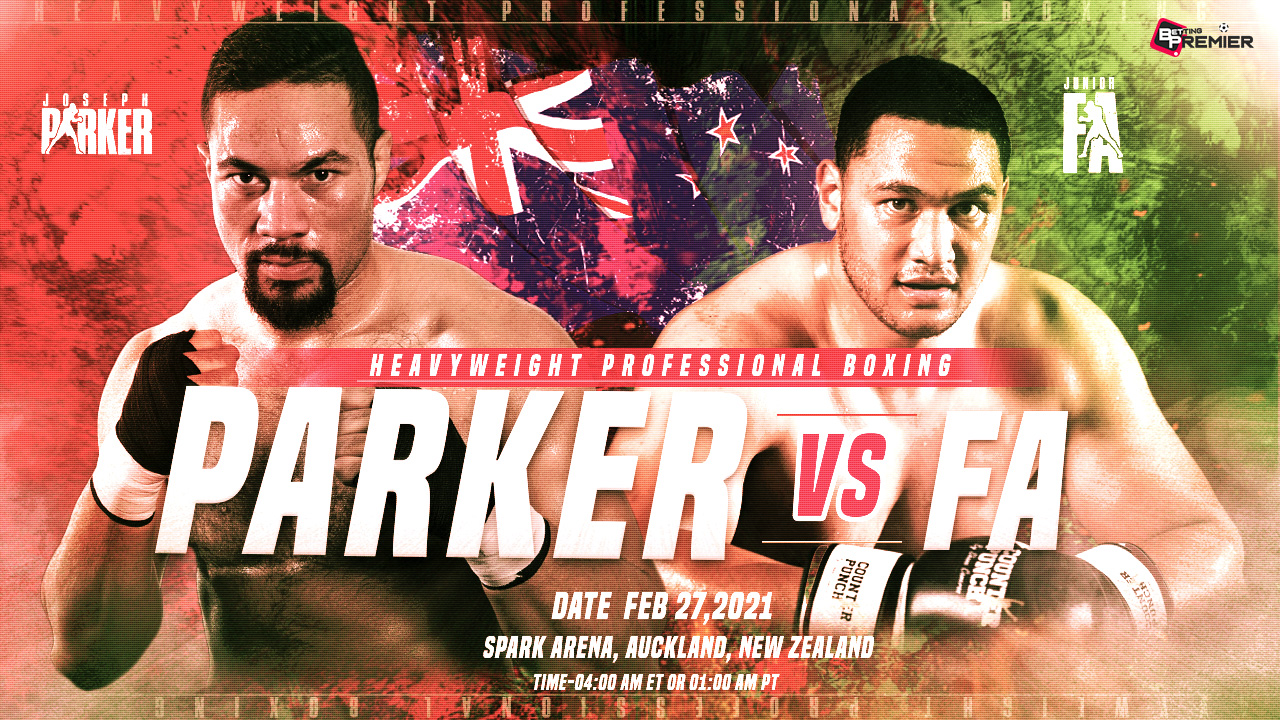 Finally, some good news blossomed from New Zealand for all the boxing fans. Spark Arena New Zealand will host an upcoming bout between the former WBO champion Joseph Parker and WBO interim champion Junior Fa. This brawl between these two prizefighters is all set to be New Zealand’s next “Fight of the century”. The winner of this bout will get his shot to face Dereck Chisora later this year. Before this main event, a lot of fighters will be brawling with the likes of Hemi Ahio, Julius Long, David Nyika and Jesse Maio. Expect complete mayhem to its peak on February 27th.

Where is Parker vs Fa fight?

How to watch Parker vs Fa fight?

Parker vs Fa is a boxing event in New Zealand that’s being co-promoted by David Higgins of Duco Events, Lou DiBella of DiBella Entertainment and Eddie Hearn of Matchroom Boxing.

Main Event is the PPV channel for watching Parker vs Fa fight in Australia, while Dazn is the streaming platform.

Boxing fans based in New Zealand can witness this mega fight on Spark Sport while Dazn provides an online streaming service.

Sky Sports is the exclusive partner in the UK that will broadcast this epic clash which means fans can watch this fight anywhere in the country if there is a subscription.

With an all-kiwi heavyweight bout between Joseph Parker and Junior Fa that awaits on 27 February at the Spark Arena, fans are going crazy about the results of the fight. The former WBO world champion eyes to have a battle against Dereck Chisora in the UK later this year. But a loss to Fa would make this much-awaited dream fight over. It has been an inspiring journey for Parker after the loss of the WBO heavyweight title against the no. 2 fighter Anthony Joshua in 2018. Parker’s resume is far supreme than Fa with the likes of Anthony Joshua, Dillian Whyte, Alex Leapai, Carlos Takam and Hughie Fury. Parker enters the ring with an impressive record of 27 wins and 2 losses with 21 KOs.

Although Fa has not lost even a single bout in his entire professional career, he still lacks to have a battle with a recognisable name in the division. The 31-year-old New Zealander holds a record of 19 wins and no loss with 10 KOs. Fa is deceptively agile in his size. But with health issues bugging him, it can result in some flat performances. Parker is excellent in the movement of his back foot. The former champion is known to be more aggressive inside the rectangular ring and will be attempting to gain more knockouts. Parker has always used his crisper jab, but Fa’s reach advantage will cause problems for the former champion. Considering their history, a toe-to-toe brawl is expected. They have met four times in their amateur days, with both of them winning two bouts each.

Parker has a far better knockout percentage with 72.41% compared to Fa’s 52.63%. The former champion was extraordinary with his punches in his last brawl against the North American champion Shawndell Winters. The 29-year-old has shown some great agility not only in headshots but also in body shots. But Fa can be ferocious with his big punch. The former WBO champion is in a great spot currently in the rankings, just behind Ukrainian fighter Oleksandr Usyk, heading towards another world title opportunity if Joshua vacates that title belt. It will be a costly affair for Parker if he loses this brawl as he will not get the title opportunity. Fa is on an unbeatable winning spree and knows that this win would offer him the title opportunity.

There is always anxiety amongst the fans all around the world in a heavyweight title fight. Considering Parker’s battle with experienced fighters in the past, he is vastly superior to Fa. Although Fa has earned international respect, there’s still a long way to go. All said and done, it’s the former champion who is going to have the last punch.