NFL Teams Ruled Out of the 2023 Playoffs 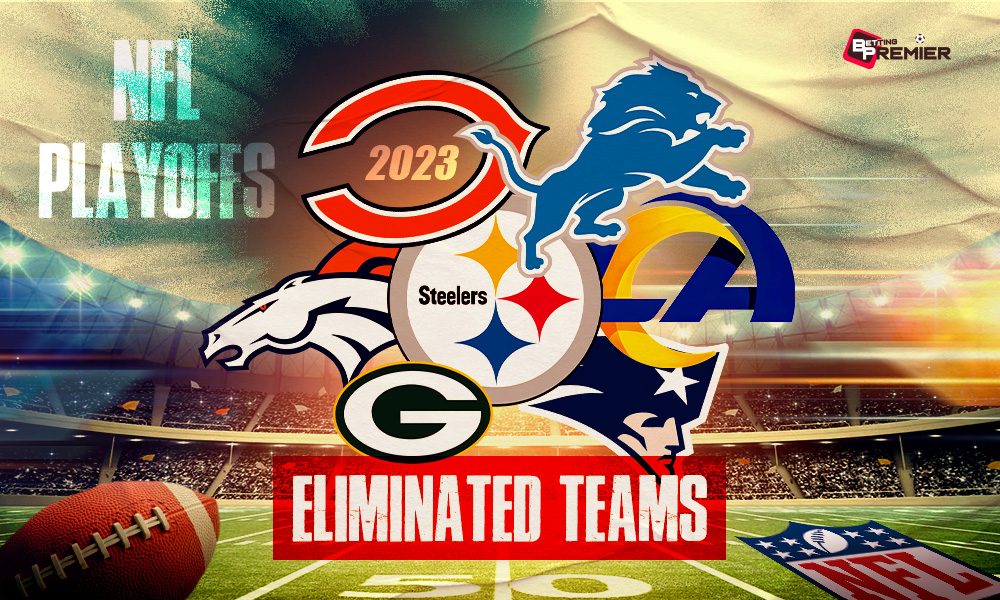 In February, the Lombardi Trophy will be awarded in Super Bowl 57, and 14 sides still have a chance to win it. For the remainder of the league, though, the offseason has begun. Week 18 marked the official end of the season for a combination of 18 clubs. Read on to find BettingPremier’s breakdown of teams that have been eliminated from the postseason.

Here is a thorough breakdown of some of the well-known teams that were eliminated:

With Miami’s victory in week 18 and the Patriots’ loss, New England was officially out of the running for the NFL playoffs in 2022. However, the season did come to a disappointing conclusion in what turned out to be a positive and negative season. Not only did the Patriots lose to the Buffalo Bills in week 18, but the Miami Dolphins also triumphed, moving them ahead of the Pats for the 7th and final playoff berth in 2022. The Pats allowed the Buffalo Bills to score twice on kickoff returns, making it a very entertaining game. On defence, they let in a lot of deep passing plays, further demonstrating the necessity for the squad to improve their secondary. The offensive held its own for the most part. The team’s defence appeared to be their demise.

All the Green Bay Packers had to break in their favour and did so for a month. It was incredible to see the pieces come into place week after week, giving the Packers a chance to claim the last NFC playoff slot. They only needed to defeat the Detroit Lions at home. That was meant to be the simple part. However, there are several differences between these Detroit Lions. First, they were resurgent with seven victories in their previous nine games coming into Lambeau Field. These Lions weren’t going down, even though a Seattle Seahawks win removed Detroit from postseason contention. They shocked the Packers at their stadium, defeating them 20-16 to finish their season and keep them out of the playoffs. A victory would have sent the Packers into the San Francisco 49ers in the NFC wild-card game the following week. They would have been the strongest club in the conference after winning five straight games. Instead, for the very first occasion in four seasons under coach Matt LaFleur, their season concludes without making the playoffs.

Officially, the Pittsburgh Steelers’ campaign is ended. After a Miami Dolphins victory, the squad was able to go on a miraculous run that brought their score from 2-6 to 9-8, but they were still eliminated from the playoffs. The Cleveland Browns had to lose, the Dolphins had to yield to the New York Jets, and the New England Patriots had to lose to the Buffalo Bills for the Pittsburgh Steelers to win the weekend. With a victory over Cleveland, they took care of business, but the remainder of the AFC East could not provide the required support. Miami will now enter the playoffs as the 7th seed, and the Steelers will end the year with a victory over the Browns in the regular season. The Steelers gave Mike Tomlin his 16th consecutive winning season while not making the playoffs.

The Rams’ 24-12 defeat to the visiting Green Bay Packers effectively ended their chances of making the playoffs. According to NFL Research, the Rams equalled the 1999 Denver Broncos for the early termination of any reigning Super Bowl winner in history with three weeks left in the regular season. The Rams haven’t resembled the Super Bowl champions from a year ago because of a slew of injuries, including those to quarterback Matthew Stafford, wideout Cooper Kupp, defensive tackle Aaron Donald, and a slew of others, perhaps most notably an offensive line that keeps shifting. Los Angeles dropped to 4-10 after losing seven of its previous eight games, marking the franchise’s first double-digit losing campaign since 2016. These 10 defeats also tie the 1999 Denver Broncos for the most suffered by a Super Bowl champion. Only four times in history has a reigning Super Bowl winner been eliminated from postseason eligibility with more than a week left in the regular season before the Rams’ loss.

The Denver Broncos season is technically done, even though they still have a few games on their schedule. Following their Sunday defeat to the Kansas City Chiefs, the franchise is officially out of the running for the playoffs. Since Super Bowl 50, they have had six straight losing seasons. After getting far down, Denver came close to making a complete comeback. The defence put in an outstanding effort, as they forced three interceptions from Chiefs quarterback Patrick Mahomes. Unfortunately, the Broncos’ 2022 season has gone horribly wrong, as they have already dropped five straight games. Every week serves as a steady reminder of how terrible this squad can be while also demonstrating how much tenacity it has. In Week 5, Denver’s game versus the Indianapolis Colts ended in a field goal in overtime, and they should have won. Although injuries aren’t an excuse, it is important to note how many they have experienced this season.

The Bears could not make the 2022 NFL postseason after losing to the Packers at Soldier Field to fall to 3-10. The Bears are now the second-worst club in the league, trailing only Houston. The team’s poor season has become the norm since they last competed for a league championship over 17 years ago. The Bears have gone through a difficult period when they’ve generally been outside the picture looking in at the playoffs since losing Super Bowl XLI to the Colts 29-17 on February 4, 2007, in Miami Gardens. The squad only reached the playoffs 3 times in the following 16 seasons, up to and including 2022. The Bears only managed to win one game throughout those postseason runs, defeating the Seahawks 35-24 on January 16, 2011, in the NFC Divisional round at Soldier Field. The Bears have just twice finished above.500 in the 13 seasons without needing a postseason berth. The Bears will witness the playoffs at home, continuing a tendency for the team.

Despite their victory in Week 18, the Detroit Lions have been relegated from the postseason. This is because they needed help from the Los Angeles Rams to succeed. The Rams and the Lions had to win the Seattle and Green Bay, respectively. Detroit was dead before they had kicked off since the Seattle Seahawks regrettably defeated those 19-16 in overtime. The Seahawks have managed to sneak into the playoffs due to them doing this. The Lions’ effort against the Packers was inconsequential because they lost to the Seahawks in their face-off game. The result was slightly bittersweet, given how committed Detroit was to a great pursuit. Even though they failed, they also took the Packers with them.